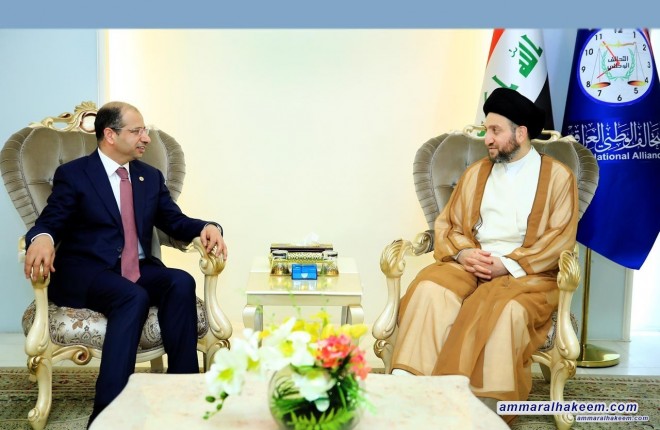 Head of the Al-Hikma National Movement, Sayyid Ammar al-Hakim, in his office in Baghdad received Speaker of the Iraqi Council of Representatives Dr. Salim al-Jubouri Saturday 19/5/2018.
His eminence with Jubouri discussed latest political situation, results of elections, and the shape of the future government required for the next phase.
His eminence renewed his call to consider all appeals and complaints submitted by political powers, indicated the importance of finding a strong government of service with a national majority able to achieve the aspirations of the people, stressed on national decision, which observes the Iraqi interest as a basis, pointed to the importance of keeping Iraq away from the game of axes, as Iraq is able to play a role of a bridge between rivals and for convergence of views.
His eminence appreciated and thanked those who participated in the recent elections and who even boycotted elections, pointed out that success of elections is another proof of Iraqi people adherence to their political system and the peaceful transfer of power through ballot boxes.