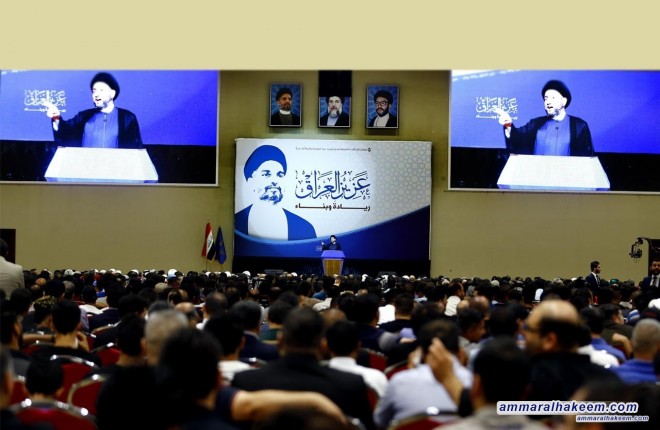 Head of the Al-Hikma National Movement, Sayyid Ammar al-Hakim
In the memorial service in the memory of Aziz of Iraq, His Eminence Hujjat al-Islam and Muslims Sayyid Abdul Aziz al-Hakim Monday 21/5/2018, defined characteristics of the coalition that will form the government of national majority to be cross-component in format and content, based on the Iraqi independent decision, have a vision and a clear program to run the country in the presence of a team of specialists and experts, work in harmony and supported by Parliament Members and with authorities able to take responsibility, to be balanced and reassuring partners without antagonizing any country but the basis is to build common interests.
His eminence pointing out that the Al-Hikma National Movement will not be part of any government that does not meet these aforementioned standards, called for a government of technocrats, whether it is of politicians or non-politicians.
His eminence stressed working with partners to form a government of service, not a government of crisis, the government of reconstruction and job creation, the government accountability not favoritism, and stressed on restoring trust, addressed the boycotters of Iraqi elections " Your voice has been heard and a loud outcry and a peaceful democratic rage against the political reality. Your message was received. We have the honor to be the echo of your concerns in the next phase.."
His eminence stressed forming a government of law, not a government above the law, a national government representing and reassuring everyone, not a government of doctrines and ethnicities, a government of integrity not a government of corruption, stressed scrutiny of transparent mechanisms to combat corruption, praised the role of the religious authority and acknowledged its role in supporting the political system with advice and guidance and appreciated the Electoral Commission and its great effort in fulfilling the elections to the last minute and for all lists and candidates, called on the Electoral Commission to seriously consider the complaints and appeals to assure the masses, runners and political powers, and to protect the rights of all.

His eminence considered using electronic polls tabulation and hardwares used for accelerating results announcement a step in the right direction, but it did not succeed and delayed the results, stressed deeply investigate claims of breaches in the devices programming of Kirkuk and other areas, should it be proved a manual tabulation should be performed and prevent similar cases in the future, indicated that the majority of appeals was against abroad and conditional voting where the election method was not used, in which confirm that there is no issues with devices, but in the used method of manual tabulation.
His eminence pointed out that the Al-Hikma National Movement have no red lines to any runner or any entity, and the movement's standard in building alliances is adherence to the program and the specifications set for alliance and stressed to adhere to the constitutional schedule, advised the new mmbers of parliament to be close to the people and and facilitate access of people to them, to work for all Iraq without exceptions, to attend meetings, committees and perform roles in government legislation and monitoring.
Regarding Sayyid Abdul Aziz al-Hakim (blessed his soul) his eminence stated:" he was firm and decisive and approachable, counseling for clarification, has a definite decision, living a simple life, made a family culture to distinguish his personal life and his social and political life and its necessities and requirements, he was characterized by political piety having religious politics, not politicizing religion, committed to vision of The Religious Authority expressed in the religion of Allah" and added "Worked on breaking the equation of system based discrimination among the components and provoke disputes, believed in the Constitution a pillar, reference and a compass to solve issues, worked to restore Iraq's sovereignty and to bring Iraq out of Chapter VII of the Charter of the United Nations, worked on national unity and activating decentralization principle to ease the heavy burden. His eminence reminded of his security theory; the popular committees that was proved to be modern and true during 2014 events, he was the first advocates of involving the community in the national task, plus reviewing security leaderships and setting the requirements of efficiency, integrity, making strategic security plans not intraday solutions, as well vision of intelligence effort and addressing causes of security deterioration on political, social and economic levels, and he saw Iraq a bridge for communication between rivals not a yard to settle disputes.