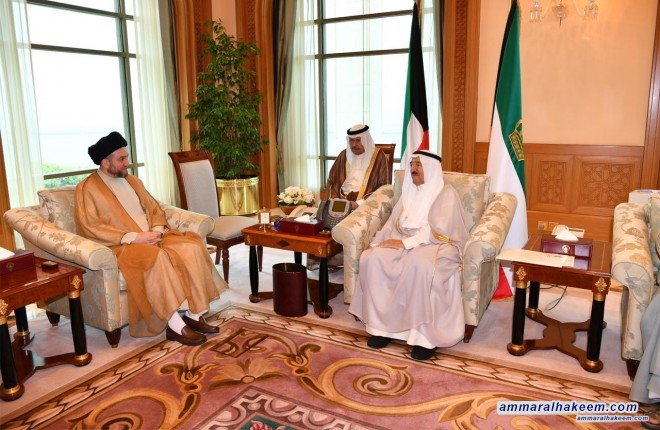 During his visit to Kuwait, Sayyid Ammar al-Hakim met HH the Amir Sheikh Sabah Al-Ahmad Al-Jaber Al-Sabah and discussed bilateral relations between the two brotherly countries and ways of developing relations, also discussed political developments in the region and the world and means to reduce tension and escalation. And praised the position of Kuwait supporting and hosting the Iraq reconstruction conference.
His eminence indicated that Iraq today differs from any previous phase and achieved victories at political level that preserved the unity of Iraq and on military level that defeated Daesh and at community level that renounced sectarianism and racism, pointed out that strong, independent and stable Iraq a necessity for the security and stability of the region.
His eminence highlited the electoral practice that took place in Iraq, and that Iraq has proved adherence to the democratic system revoking to ballot box for a peaceful exchange of power, stressed that Iraqis are serious about forming a government of service capable of overcoming crises, without antagonizing from any side, and to build best relations with countries of the world, region and neighborhood countries on the basis of common interests.
Regarding the regional situation, his eminenece indicated that the region is in a state of escalation that does not serve anyone, called on everyone to assume responsibilities to avoid any risk because it will not be in the interestof anyone, and appreciated the positions of the Amir of Kuwait in defusing crises.
Amir of Kuwait praised ideas of Sayyid Ammar al-Hakim, and expressed Kuwait support for Iraq to overcome its crises.