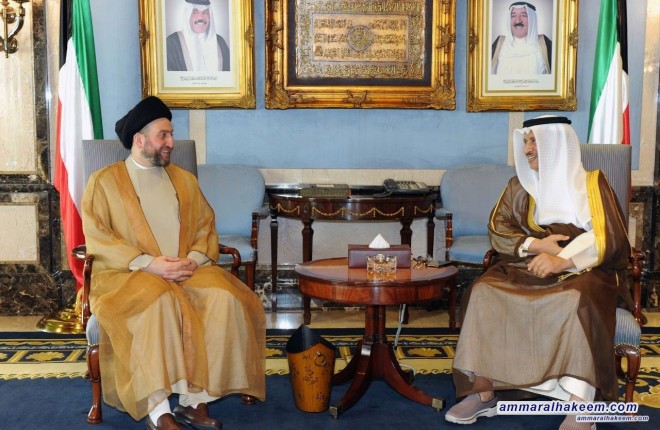 Sayyid Ammar al-Hakim on the first day of his visit to Kuwait and after meeting with HH the Emir of Kuwait and Crown Prince, met the Prime Minister Sheikh Jaber Al-Hamad Al-Sabah on Wednesday 23/5/2018
His eminence discussed birateral relations between the two countries and the two brotherly peoples, appreciated the role of Kuwait in hosting the conference of reconstruction of Iraq, emphasized that stability of Iraq is in the interest of all and support regional and global security.
His eminence touched Iraq's reality as one of the most important investment attraction to the world as Iraq need reconstruction and restoring its infrastructure, stressed that this requires a government of service comprised of a national majority with specific features and agreed deadlines and this is the current work of the Al-Hikma National Movement with the Iraqi political powers.
Regarding relations of Iraq with the regionandal and neighboring countries, his eminence indicated that the future government is required to be open to everyone in accordance with the Iraqi interest without atagonizing anyone, indicated that Iraq will not enter the game of axes, but Iraq is a bridge between rivals for its historical and geographical qualities.