Sayyid Ammar al-Hakim: We renewed our alliance with the Sadrist movement and are keen to form the next government by an independent Iraqi decision 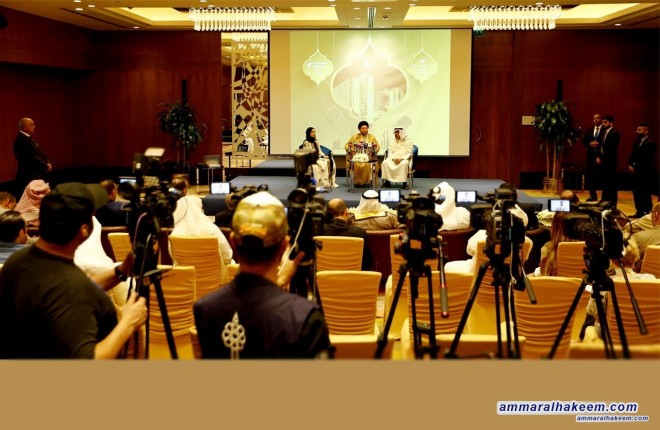 Head of the Al-Hikma National Movement, Sayyid Ammar al-Hakim, In a press conference held during his visit to Kuwait Wednesday 23/5/2018 indecated the the Al-Hikma and the Sadrist movement renewed their alliance, and that this alliance has roots and was able to form some provincial councils in 2013, was supportive to Dr. Haider Abadi administration in the 2014 elections, describing ( Al-Hikma and Saairun ) lists coherent. The recent elections in Iraq were marked as an expression of a dividing line between establishment of democracy and consolidating democracy and building the state, expressed his confidence that the next government would be the result of Iraq vision, decision and interest, refused to talk about Iraqis drawback to civil war, because they overcame these stages and voted for the forces of the moderates .
His eminence explained that Saairun coalition won the biggest number of seats, however it does not qualify the coalition to choose a new president of the government, considering that no political bloc had unanimously won, therfore it is expected to remain in the process of forming a coalition government for several months, expressed confidence in the ability of Iraqis to form a government according to the vision of the national majority "Which we see as necessity for the next phase".
His eminence pointed out to the tensions in the region and expressed his concern, called for dialogue to overcome differences in the region and that the new strategy may cause a lot of escalation and Iraq will be one of the countries affected by this escalation, which requires neutralizing Iraq from any axis in the region so that Iraq can build experience and enjoy wealth and economic resources.