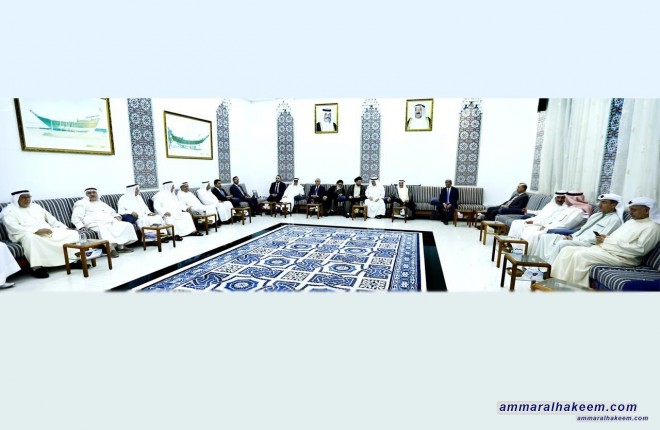 Head of the Al-Hikma National Movement, Sayyid Ammar al-Hakim, during his visit to Kuwait, and in continuation of the known customs of Shahid al-Mihrab and Aziz of Iraq ( bless their souls) visited a number of Diwans in the State of Kuwait, including Diashti, Al Babtain, Bahman, Makki Hussein Al-Jum'ah, Al-Marafi and Al-Mutawa.
His eminence commended the value and giving of these social lobbies that bear and discuss a number of important issues.
His eminemce in a speech stated that Iraq of today radically differs from Iraq of the past, making achievments and accumulating experiences and progress, indicated that Iraq made maltipule victories on political, military and social levels, and all its victories are in the interest of regional security. Iraq has achieved victory at the political level in maintaining unity, and a social victory in ousting sectarianism and racist discourse and another victory on the military level in defeating the terrorist Daesh.
His eminence pointed to confronting extremism and Daesh ideology, called on all to assume their responsibilities in combating extremist and exclusionist ideas, noted that success in this challenge requires economic, developmental and social solutions.
His eminence expressed optimism about the future of Iraq, pointed out that the recent elections were the dividing line between the establishment of democracy and consolidating democracy and moving forward to the stage of state-building the most important challenge facing Iraq, pointed to the need to form a government of service with vision and program and specific deadlines that would result in provision of services.