Sayyid Ammar al-Hakim: Federal Court repeal of third amendment of electoral law, 10% crosscheck of the votes, and hold underperformers and implicated individuals’ accountability are measures that would convince everyone of elections and results credibilit 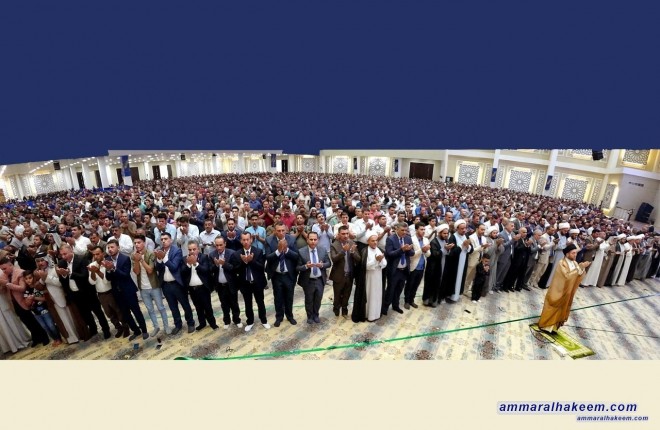 Sayyid Ammar al-Hakim indicated that political negotiation and forming the government cannot be achieved with lack of trust, political revenge or tendency to achieve personal, partisan, ethnic and sectarian gains, but it is achieved in the atmosphere of mutual trust and political understanding and give priority to public interest on other interests,
pointed out that everyone has taken enough time to express his visions and views on the overall political scene, everyone is well aware of the suffering of Iraq and its people and also knows where the basic problem lies that accompanied forming the political process since 2003, explained that Iraq does not suffer diagnosing crisis, but a crisis of will and addressing, not a crisis of solutions, but it is a crisis of courage and decision making, everyone is hearing and watching in daily basis the suffering and sighs of our people because of electricity, water, medicine and youth unemployment and lack of jobs and a decent life, and also know violations of others towards the sovereignty, security and stability of Iraq, his eminence added "I do not want to be pessimistic before my people and my family, but there is a heartburn for what is happening in the country, the political atrophy and weakness towards fading rational solution and wisdom required in most of our domestic and international issues” reiterated his belief in the national majority as a realistic and acceptable solution to some of political system problems, and warned going back to the old equation and expect better results, sectarian and national alignments cannot produce a national government that meets the aspirations of the people, pointed the need to select a cabinet of specialized technocrats (independent or political) able to meet the needs of citizens and push the country to progress and prosperity, adding to all of the above the possibility of forming a bloc of majority and institutionalize it, "With a national majority it is possible to form the bloc of majority and institutionalize it, develop "Leadership”, "Political" and "Public" authorities within the bloc of majority that will be able to strengthen partnership in the decision making between the powers participating in the government, study challenges and agree on solutions and clear approaches to eliminate problems and internal and external crises, and support the government in the reform of economy, services provision, combat Corruption, strengthen security and reconstruction of cities, resettlement of displaced persons and the provision of housing, employment and other basic functions. " his eminence said.
His eminence addressed youth of Iraq and said: "You are the future and the support to this wounded country. Do not fail in diligence, perseverance and excellence in all aspects of life. We know the size of suffering you are facing, yet you are so young, we are also aware of the size of ambition, and the creative energy that is not unvested yet, pledged to help and support young people as long as they help and support their country and their people, "I will not omit in protecting your dreams and achieve a decent life worthy of you." His eminence said, warned against relying on sslandering and rumors that destroy Iraq’s society and its noble and original values. The danger of distorting and falsifying facts is not less than dangerous killing and bombing, both actions are terrorism despite of different methods.

His eminence addressed the organizations and masses of the Al-Hikma National Movement by saying: "You are the support, the family and the clan, and you will remain the pillar and dependable after the Almighty Allah in serving our people and supporting our project to defend the oppressed and their rights ... and to reach that day in which Iraq recovers its health and glamour among nations, you were always the example of loyalty and devotion In the face of ordeals and challenges and you are the best in representing your people and your movement. "
His eminence indicated that the Al-Hikma National Movement has begun a new phase of comprehensive review of its internal situation on the basis of (Revising, not Retreating), and added that he had authorized the political and executive bureaus in the Al-Hikma National Movement to make the necessary adjustments towards further development and preparation for the next phase “befitting your proper class in apprehending opportunities and for the advancement of this country, we have many tasks and the future is yours" his eminence said, called on everyone to cooperate and assist in completing this corrective and developmental movement process and not argue over pettiness, show courage, altruism and selflessness.