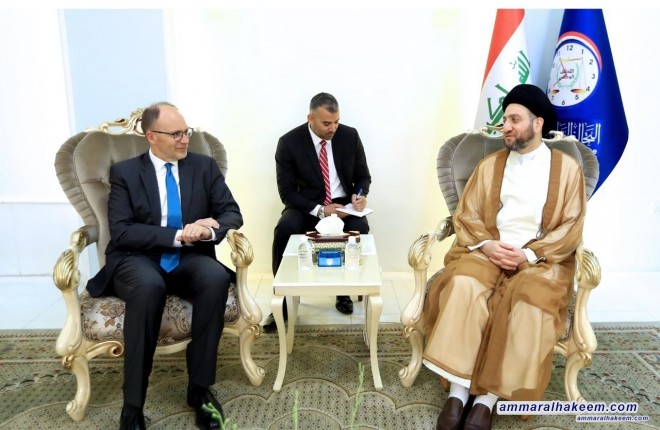 Head of the National Iraqi Alliance, Sayyid Ammar al-Hakim, in his office in Baghdad, received US Ambassador Douglas Silliman Tuesday 19/6/2017
His eminence with Silliman discussed bilateral relations between the two countries and the developments of the Iraqi, regional and international political scene.
His eminence reiterated the immediate importance of the national majority government and the formation of opposition and pro-government, put an end to quotas and having everyone in the government with absence of responsibility at the same time citing messages shown by election participation rates and electing new faces, stressed on formation a government of service rather than government of crisis, and a government of competencies whether they are independent or political.
His eminence referred to the expected meeting of blocs aimed to discuss the course of the political process in Iraq and mechanisms of forming the next government, indicated the importance of dialogue and agreement on programs and fulfilling promises of electoral campaigns, and stressed the need to give priority to the interests of Iraq through a unified national decision.