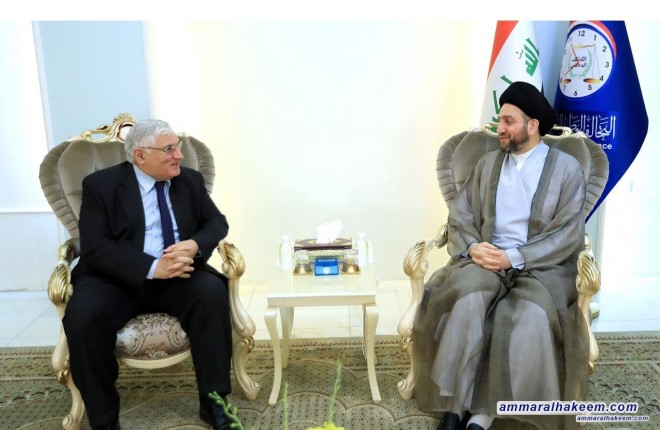 Head of the National Iraqi Alliance, Sayyid Ammar al-Hakim, received the Communist Party delegation headed by Party Secretary Raed Fahmi and members of the Political Bureau in his office in Baghdad Thursday 21/6/2018
His eminence stressed the importance of finding a governing national majority and a responsible opposition without excluding any party, and those who participates in the government should shoulder the responsibility and not turn to become opposition while being part of the same government.
His eminence pointed out that Iraq has recovered and needs a team and practical plans to invest the existing pros and avoid the setback, stressed the need for political balance between the powers as an important entry to find a noticeable stability in political action.
His eminence pointed that the agreement on the project brings the powers together, indicated that if agreement exists without a project or common goals will not produce a successful government and political model, pointed out that current phase requires a governing national majority and a responsible opposition and thus a balance within the parliament powers will exist and everyone takes responsibility, and that does not mean excluding anyone, but the of the majority and the responsible opposition requires to make it clear that those who participate in the government must take responsibility and not become opposition while being part of it.
His eminence pointed out that the majority government must have a technical and practical program that meets the aspirations of the people and according to a specific time frame, and open ended projects are not acceptable, stressed the need for partnership in decision making so that everyone will take responsibility.