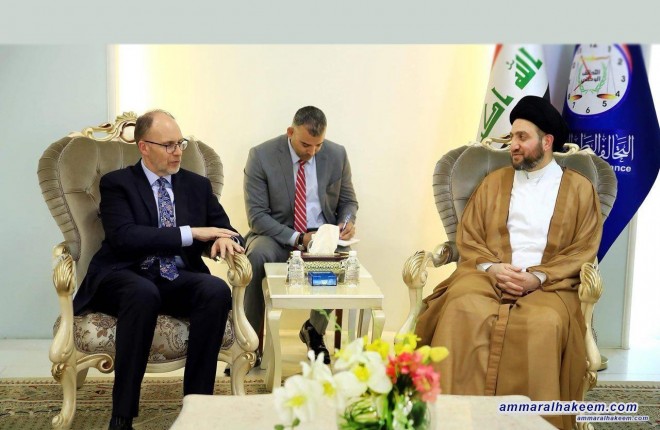 Head of the National Iraqi Alliance, Sayyid Ammar al-Hakim, in his office in Baghdad received US Ambassador, Mr. Douglas Silliman Thursday, 28/6/2018
His eminence with Silliman discussed developments of the Iraqi, regional and international political scene, and bilateral relations between Iraq and America.
His eminence stressed that the ongoing dialogues between the political blocs should focus on prioritizing the interest of Iraq above personal and partisan interests, warned from returning to the narrow bankarizations and factionalism as it will not be in the interest of anyone, indicated that next phase should be characterized by effective government and parliamentary performance.
His eminence emphasized the ability of Iraqis to wisely and rationally manage their differences, and that this management will lead to national understandings that maintain Iraq's stability, independence, and meet the aspirations of the people.