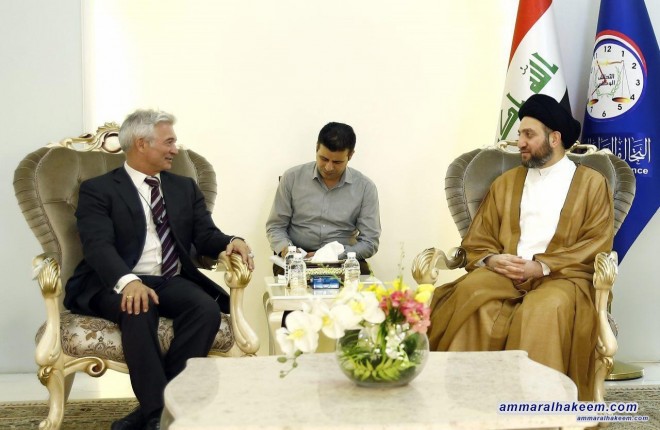 Head of the National Iraqi Alliance, Sayyid Ammar al-Hakim, in his office in Baghdad, received Ambassador of the European Union to Iraq, Mr. Ramon Blecua Tuesday 3/7/2018

His eminence with Blecua discussed forming the government and developments in Iraq and the region.
His eminence praised the role of the European Union in promoting democracy in the country, stressed the quest to form a national majority government, and that the Al-Hikma National Movement has standards regarding forming the government.
His eminence reiterated necessity of the European Union taking its role in passing the vision of Iraq to protect Iraq from conflict between wills in the region and to work to convince the international and regional parties to this trend.
The Ambassador of the European Union mission valued the pivotal role of Head of the National Iraqi Alliance and efforts with the political powers to form the government, and expressed congratulating for the Al-Hikma National Movement results achieved in the elections.