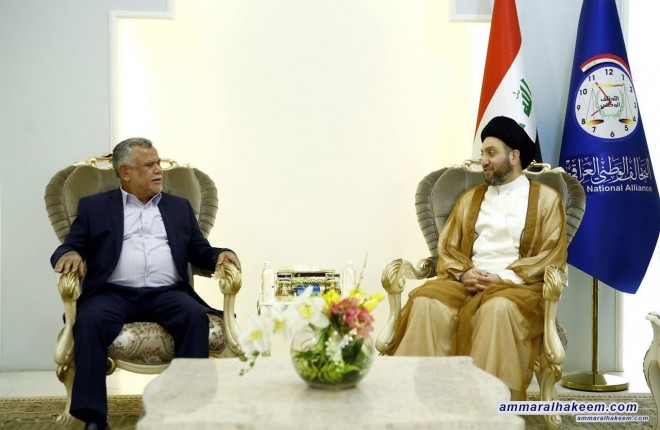 Head of the Al-Hikma National Movement, in his office in Baghdad received President of the Fatah Alliance, Mr. Hadi al-Amiri Friday 13/7/2018.

His eminence with Amiri discussed demonstrations in Basra and a number of cities of Iraq, stressed on listening and to meet these demands, and work on plans and programs that would convince the demonstrators, noted that demonstrations demands are the most basic rights such as electricity, potable water and job opportunities. His eminence with Amiri also covered forming the future government and necessary alliances to fulfill the promises made to the Iraqi public before the electoral practice. His eminence stressed that the current phase requires the national majority and the national opposition according to the specific program and specified time frame, called for continuing dialogues and giving priority to the public interest over private interests. His eminence stressed the importance of listening to demonstrations and voices of people demanding basic rights, called for unconventional solutions to address service crises, and urged the federal government and the local government to urgently meet the demands and provide services.