The Political Bureau of the Al-Hikma National Movement commence a meeting under the chairmanship of Sayyid Ammar al-Hakim, supports the rightful demands of demonstrators and stresses to watch for intruders 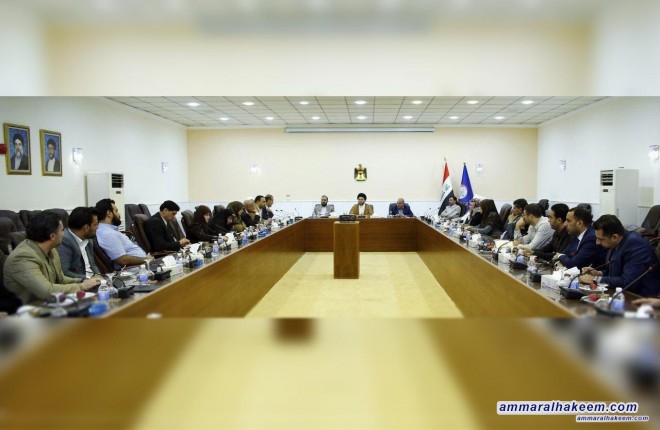 The Political Bureau of the Al-Hikma National Movement during an emergency meeting held under the chairmanship of Sayyid Ammar al-Hakim Sunday, 15/7/2018 at his eminence office in Baghdad, emphasized the importance of upholding security and support the rightful demands of demonstrators in several provinces of Iraq, and the importance of dealing with the current events in a discipline manner.
The conferees stressed to watch for intruders and elements driven for sabotaging and damaging public properties, and the importance of supporting the security services to fully take their role and redouble the government effort to fulfill the promises, plus the importance of clearing the media atmosphere from fabrications and distortion. The conferees also recommended on ground follow-up to the situation and take the initiative to communicate with everyone to reach effective solutions for the recurring crises.
The statement reads as follows:
In the name of Allah the most Gracious the most Merciful

In its main headquarters in Baghdad and on 15/7/2018, the Political Bureau of the Al-Hikma National Movement held an emergency meeting to discuss the events witnessed by our dear Iraq and the nature of the repercussions that were produced by the demonstrations in a number of our governorates. The conferees stressed the need to maintain security and practice high discipline with the existing events. The meeting stressed the Al-Hikma National Movement stands with the rightful demands of the public, which has long suffered with the lack of services, and the necessity to watch for intruders and elements driven to sabotage and damage public properties, and to show support and assistance to the security services to take their fully role and to redouble the government effort in completion the commitments and fulfilling the obligations of the federal government and local governments to the esteemed citizens, and to clear the media atmosphere from falsification and distortion through the media-neutral and professional and national platforms, and meeting recommended to thoroughly conduct on ground follow up to situation and take the initiative to communicate with everyone to reach effective solutions to the repeated crises..