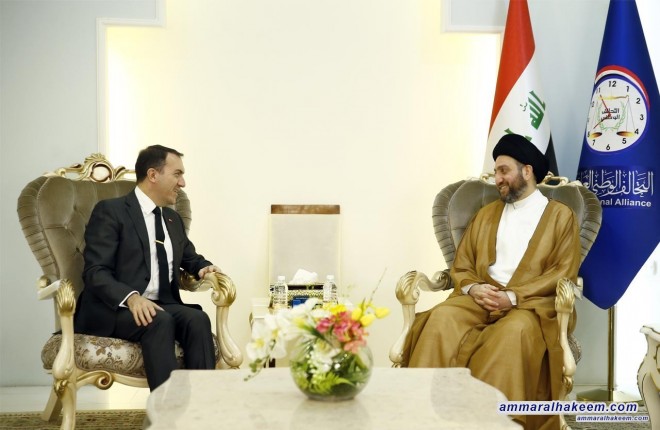 Head of the Al-Hikma National Movement, Sayyid Ammar al-Hakim, in his Baghdad office, met with the Turkish ambassador in Baghdad, Mr. Fatih Yildiz, Wednesday 18/7/2018
His eminence with Yildiz discussed common interest between Iraq and Turkey and bilateral relations between the two neighboring countries. The meeting focused on water scarcity in Iraq and the necessary steps to address the issue.
His eminence pointed out that the stability of Iraq is important for the region and the world, stressed that Iraq need a government of national majority and prioritize services. His eminence called for agreement and satisfactory solutions of Iraq and Turkey on the issue of water relations of Iraq to ensure Iraq’s needs and the interests of its citizens, added that the government of national majority will be responsible to meet the aspirations of citizens that have emerged during the demonstrations in a number of cities in Iraq.