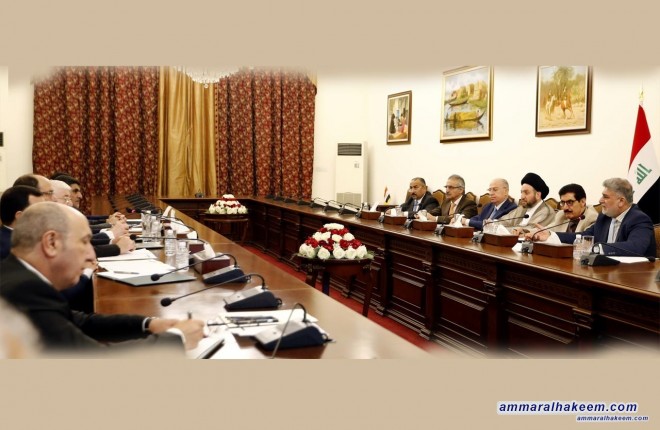 Head of the Al-Hikma National Movement, Sayyid Ammar al-Hakim, attended leaders of political blocs meeting held in the Baghdad office of President Fuad Masum, the meeting was presided by His Excellency Wednesday 18/7/2018.
His eminence stressed the importance of saving Iraq from its current crises, called on all to assume responsibilities towards the Iraqi people and achieve their ambitions and aspirations.
His eminence reiterated that the upcoming phase requires a national majority government, and that the majority with its national title will restore balance to the political system in Iraq as it represent a parliamentary system based on pro-government and opposition, the national majority government is a solution to end the quota.
Regarding results of recent elections, his eminence called to adhere to and accept the results issued by the Electoral Commission, stressed to continue meetings between the political blocs to conclude the required alliances.
Regarding the demonstrations witnessed by a number of cities in Iraq, His eminence renewed his stand with the rightful demands of demonstrators,maintaining security and not damaging public and private property, pointed to the need to form more than a crisis cell to follow up and find ways to fulfill the demands.