Sayyid Ammar al-Hakim receives Brett McGurk, the US president's envoy to the international coalition against terrorism 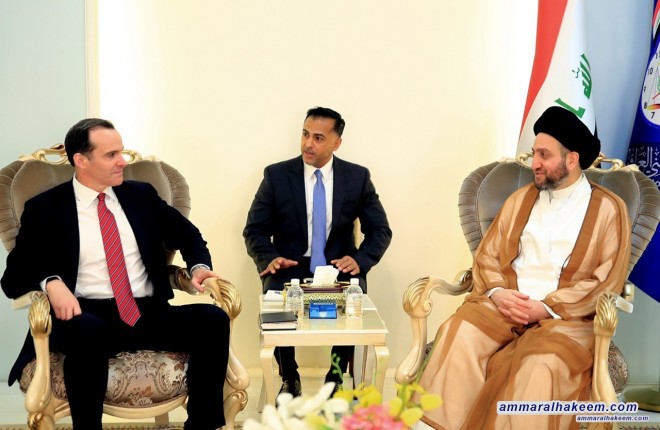 Head of the Al-Hikma National Movement, Sayyid Ammar al-Hakim, in his office in Baghdad received the US envoy to the international coalition against terrorism, Mr. Brett Magurk, Thursday, July 26, 2028,
His eminence with McGurk discussed combating terrorism and the challenges facing Iraq after completing the military confrontation with the terrorist Daesh. His eminence indicated that Iraq is before the challenge of service provision to be won in order to culminate the victories achieved by Iraq on the military, community and political levels.

His eminence pointed to the next phase facing Iraq and the upcoming government, stressed the importance of forming a government in accordance with the Iraqi interest away from external interventions, and able to provide a decent life for Iraqis. His eminence reiterated his support to the rightful demands of demonstrators and the necessity of fulfilling the demands as soon as possible and protect Iraq from politics of international axis.

Regarding the regional situation, his eminence reiterated the importance of dialogue to overcome the region crisis, stressed the need to overcome differences and resort to political solutions for crisis and protect the region from threat of wars.