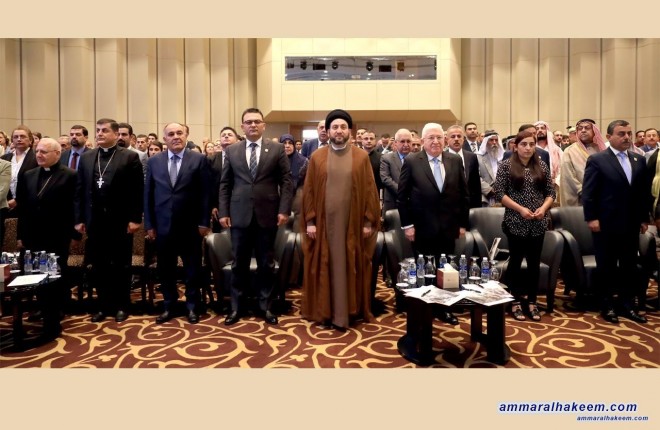 Head of the National Iraqi Alliance, Sayyid Ammar al-Hakim, in a speech at the second conference marking 4 years of Yazidi genocide, held at the Babylon Hotel Thursday 2/8/2018, called on elected large political blocs to nominate their candidate for the prime minister position who meets the criteria of being strong, decisive and courage, noted that the Al-Hikma National Movement would have presented a young candidate that meet these specifications if the movement had more seats.

His eminence explained that the higher religious authority concluded the criteria of selecting the future government indicating the need for a strong, decisive and courageous prime minister, and if the Al-Hikma National Movement had had more seats a young candidate these specifications could be presented, called the elected large blocs to clearly nominate the candidate for the prime minister position who meets the specifications, pointed out that in order to carry out the task it is necessary to have a strong equation that includes a strong alliance among the winning powers, a strong prime minister and a strong cabinet supported by parliament majority.

His eminence renewed his stand with the rightful demands of the demonstrators and to prevent discrediting the demonstrators due to exploitations by some sides aiming for private agendas, stressed that those groups demanding the most basic rights are the real guarantee to prevent negligence by officials and abuse of power, urged all politicians to know that "we are before a different generation of youth that did not live the complexities of the past, and does not care about the consensus of the present among the political class, but strongly looks forward to the future and the powers should contain it and meet its demands.

His eminence reiterated his call for regional dialogue to find solutions to regional crises and to prevent the return of gangs of Daesh or other terrorist forces. His eminence urged to consider the suffering of the Yezidis as genocide, and internationalization of crimes, expedite securing a safe voluntary resettlement of displaced families to their original areas, and mental rehabilitation of victims and build a monument that commemorates the sacrifices of Yazidis.