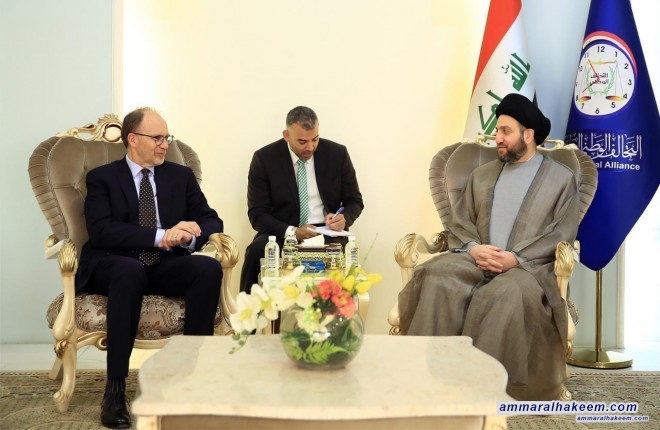 Head of the National Iraqi Alliance, Sayyid Ammar al-Hakim, in his office in Baghdad received US Ambassador to Iraq Mr. Douglas Silliman Tuesday 14/8/2018 His eminence outlined three conditions for the success of the future government and indicated "The success depends on the successful formula that ensures forming a national majority government and a successful program that includes a clear timeframe to fulfill the demands of the people plus a successful and effective team capable of accomplishing the government program.

His eminence welcomed the announcement of the election results, which will pave the way to accelerate the formation of the government and ending political debates, and called to focus on meeting the needs of people and provide services.
Sayyid Ammar al-Hakim pointed out that success is linked to political powers' leaving narrow frameworks and interests and moving towards national interest, and that the future government will likely face big challenges considering the current circumstances in the region, expressed rejection to sanctions and starvation of peoples politics that has negative impact on the region's stability and security, plus its negative effects on the Iranian and the Iraqi people, as the Iraqi people is associated with the Iranian people with deep social, economic and cultural relations, and reiterated the call to refrain from escalation and find appropriate climates to address the issues.