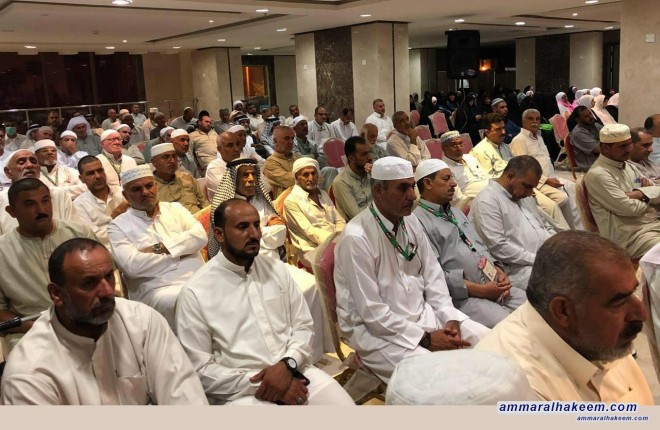 Head of the National Iraqi Alliance, Sayyid Ammar al-Hakim, in a speech that was read on his behalf at the Twenty-eighth Iraq Conference in the Holy Land marking pilgrimage Thursday 16/8/2018 stressed the need to expedite ratification the election results and to end political debates so to seriously engage in forming a strong government that provide service in accordance with the terms adopted by the Supreme Religious Authority to provide services, fight corruption and strengthen security and stability,

Called to make an effective, coherent and strong government team with a practical and successful program, and governed by a clear and acceptable timeframe, expressed his rejection to starvation of peoples politics , which has negative consequences on the security and stability of the region, and reiterated his call to call to steer away from escalation and confrontation.

His eminence recalled the role played by the Shahid al-Mihrab, Grand Ayatollah Sayyid Muhammad Baqir al-Hakim (sanctify his soul), and the difficult circumstances in which the conference was held, that despite the difficulties at the logistical, the inconvenience and media appearance level, however it was successful and achieved the intended results and the wanted impact, noted that speaking about the Iraq conference is speaking about the suffering of the Iraqi people and the pain and calamities, the hope and responsibilities that Shahid al-Mihrab Muharab (sanctify his soul) lived, pointed to the role played by the believers in the success of this conference, they were at the forefront of supporters and the spearhead defenders of Iraq and the Iraqi people, and reminded of Shahid al-Mihrab quest to invest opportunities to introduce the suffering of the people of Iraq until fall of the regime through the sacrifices of martyrs and true fighters, urged the pilgrims to pray to Iraq and its people, as well as to know the Islamic rulings during this ritual and to invest the time in prayers and supplications.