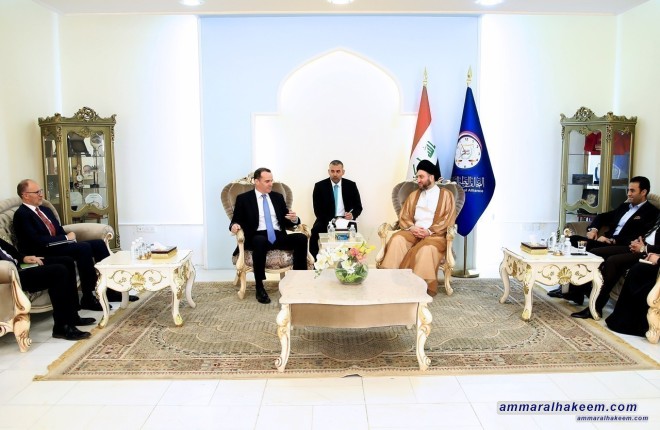 Head of the National Iraqi Alliance, Sayyid Ammar al-Hakim in his office in Baghdad received the envoy of the American President to the International Coalition Against Terrorism, Mr. Brett McGurk Saturday 18/8/2018
His eminence with McGurk discussed the latest political situation in Iraq and the region, and that for the next phase Iraq's need a strong and capable government that can meet the aspirations of the Iraqi people according to the conditions established by the religious authority for success. His eminence pointed out that " chances to find the national majority project is closer and more obvious than before, especially as we approach the Federal Court ratification of election results" and pointed the importance of ending political debates and keeping the government away from private interests and favoring the public interest.
His eminence reiterated his rejection to starving people, and called for dialogue so that the region and its people can enjoy wealth, called for taking into account the special circumstances of Iraq and its relationship with neighboring countries and the region, and particularly the relationship with the Islamic Republic of Iran.