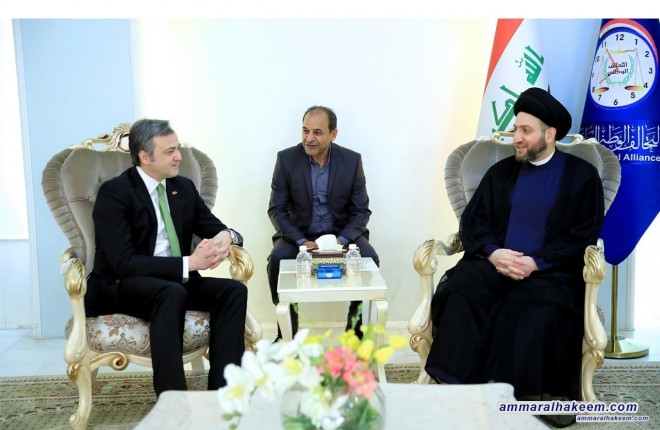 Head of the National Iraqi Alliance, Sayyid Ammar al-Hakim, in his office in Baghdad received the Ambassador of the Republic of Serbia to Baghdad, Mr. Balov Uros Sunday 19/8/2018
His eminence with Orus discussed bilateral relations between Iraq and Serbia, that extends to more than sixty years, and Serbia's contribution to Iraq's reconstruction and investment opportunities.
His eminence stressed keenness of Iraq to strengthen relations with the countries of the world on basis of mutual interests, noted that Iraq after 2003 Iraq is open to everyone.
Regarding the Iraqi political situation, his eminence pointed to the Serbian Ambassador that Iraq is steadily stepping towards consolidation of democracy, and the importance of the national majority at the current time as an urgent need at the current stage to achieve the aspirations of the Iraqi people, fulfill the people's demands, abide by the conditions provided by the religious authority for success and the fight against corruption, The future government, in addition to its national majority quality, must be strong, have the capacity and able of providing services,implementing comprised of a strong team able to implement a time bound service and development program.