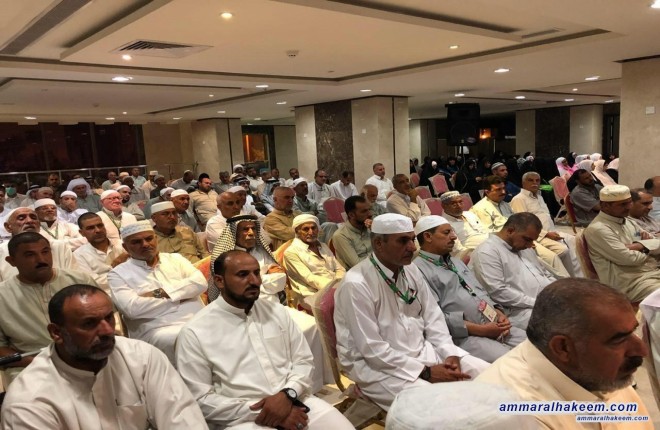 Head of the National Iraqi Alliance, Sayyid Ammar al-Hakim, in the Eid Al-Adha prayer sermon at his office in Baghdad 22/8/2018 called to expedite forming the government through inviting His Excellency the President of the Republic to hold the first meeting of the Iraqi House of Representatives and give the opportunity for the largest bloc to form the government based on the Constitution terms and timeframe, cautioned against delaying and considered it more disruption which is not consistent with the necessities of the current phase. “There are many issues that require the presence of the will of the people represented in the new parliament and to take its real role in protecting the interests and security of this country and its citizens”.
His eminence stressed to abandon political subjectivity and clear it from government formation atmosphere,” It is not right to be preoccupied with personal positions towards one or the other under complex and confusing circumstances that may destroy everything that has been achieved over the past years and expose the country to more risks and challenges.”
His eminence pointed out that “Iraq will not be spared of the regional challenges and international crises consequences that are besetting the region, only through a bold national policy that protects the country from the policy of proxy struggle, and this will not happen without political stability and national awareness that looks to the crises through the perspective of high national interest of our beloved Iraq”, warned against dragging Iraq to square one if sectarian and ethnical alignments and the intersecting regional and international interests alliances in the Iraqi issue returns, adding that “the equation of sectarian and ethnical alignment will not produce a government of service and will not produce a solution to the intense disorientation that we suffer from in prioritizing, on the contrary it will be a consensual formula at the expense of the courage required to make decisive and firm decisions to combat corruption and absence of necessary services for citizens.”
His eminence identified the next phase options national majority or partnership government in accordance with the national space without returning to the sectarian and ethnical lineups, or not participating in the future government and going for the opposition if both options the first and second could not be found. His eminence explained "the national majority option is a realistic solution between the consensual democracy that we have lived during the previous phase and the leading numeric political majority in the democratic countries and it means breaking the rules and the old dominant equation (All are partnering and all are opposing), which did not produce a state, did not achieve internal cohesion and harmony and did not provide services, and contributed to deepening quotas and corruption, and expanding the gap between the people and political powers”, adding that "the national majority will achieve integration and interaction among the components within a unified Iraq, and will not ignore the rights of components or ignore their roles or circumvent the principle of balance in representing social components in the political process. "
As for the second option, partnership in the national space without returning to sectarian and ethnical spaces, “this option requires breaking the rules of the old lineups and selecting advanced positions within the framework of the national equation, everyone participates in selecting the three presidencies and everyone bears responsibility when making this choice and bears the consequences of the accomplishments or failures, the components will not bear the responsibility of their officials, and selecting officials for all positions based on the criteria mentioned by the Supreme Religious Authority and claimed by the people”.

His eminence explained the third option if not taking the first and second options by saying "not to participate in the future government and going for the constructive opposition in the event that the first and second options have not been achieved" added that “we will not be ashamed and will not give a second thought to any step for the interests and trust of our people and our masses and at any cost, being pro-government nor being in the opposition concern us before the legitimate, moral and national accountability towards our country and our beloved people and wherever it is necessary we will take the decision and announce it without hesitation”.
His eminence held everyone responsible for flattening youths’ dreams, expressed his disagreement with those who read the recent popular protests in a superficial manner, relying on youth ages ranging from (15_25) years of most of protesters, and some of the demands mentioned in their slogans employment opportunities and services, indicated that the Iraqi society is mostly comprised of young people not elderly ones, and most of protests in the world are led by young people and Iraq is no exception, and added, "We have to recognize that we are in front of a different generation of youth by its thoughts, behavior, relations and his perspective to things, a generation that does not care about the complexities of the past nor the balance of the present, strongly gazing towards the future, I’ve made my mind to be with standouts not the backwards, and as we opened the Al-Hikma movement doors for them, we will effortlessly work to empower them in the state positions", and called upon politicians to open their doors to young people and empower them on political and governmental levels, “otherwise, political aging is the end of the political entity, and nothing else.”
His eminence stressed the difficulty of conceiving that Iraq would not be affected if the Islamic Republic of Iran was exposed to the problems and complications of the conflict with the United States. It is also difficult for the Islamic Republic to imagine that it would not be affected if Iraq experienced continuous economic, political or security collapses. The same issue applies in Turkey, Saudi Arabia and the neighboring countries surrounding Iraq, his eminence pointed to the geographical and cultural destiny that brings Iraqis and Iranians together as Iraq is linked to its geographical, historical and cultural Arab surroundings, called on Iraqi politicians to diligently work and use all means available to find common grounds for American and Iranian interests away from sanctions and threats that will only bring more war and destruction to the region, and added “ We cannot remain idly by if the economic sanctions against the Iranian people are exacerbated. We Iraqis know very well the effects of economic blockade that we experienced in the 1990s, and starve the peoples to influence political regimes is an inhumane policy, Iraq’s interests are not found in the context of struggles and sanctions”.
His eminence expressed his awareness to the consequences of not complying to financial restrictions imposed on countries with a rentier economy such as Iraq, called on the United States to reconsider the option of imposing sanctions and blockade on the Iranian people and to realize the magnitude of repercussions affecting Iraq as a result of that, there are mutual commercial interests between the Iraq and Iran, and old and deep cultural and historical links among the two peoples “ We have already made this clear during our frequent meetings with delegations represented by the US administration and other international missions.”