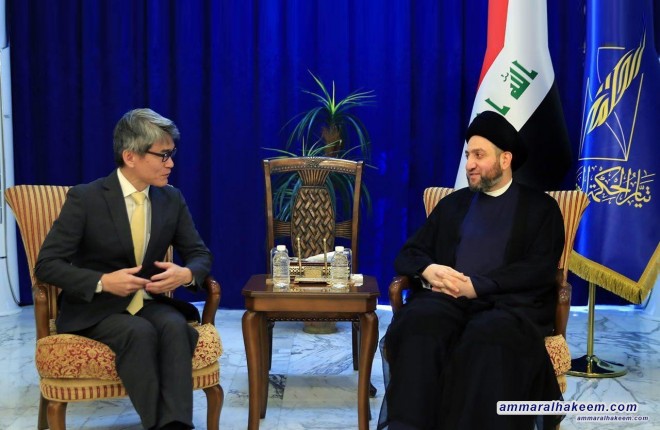 Head of the Al-Hikma National Movement, Sayyid Ammar al-Hakim, in his office in Baghdad received the newly appointed Japanese Ambassador, Mr. Naofumi Hashimoto, Tuesday 25/9/2018
His eminence reiterated the necessity of complying with constitutional deadlines for electing the President of Iraq and forming the Iraqi government.
His eminence discussed latest political situation in Iraq and the region and the relations between the Iraq and Japan, stressed the need to complete constitutional entitlements and forming the government.
His eminence pointed out the necessity of working to enhance relations between the two countries and benefit from Japanese companies experiences in building and reconstruction of Iraq. His eminence congratulated His Excellency Ambassador Hashimoto marking assuming ambassador duties of the friend country Japan, expressed wishes for ambassador's success, and that relations among the two countries will witness positive development on all levels during his tenure to represent Japan in Baghdad.