Sayyid Ammar al-Hakim: the freedom to elect ministers do not prohibit consultation among political blocs, reform is a joint responsibility 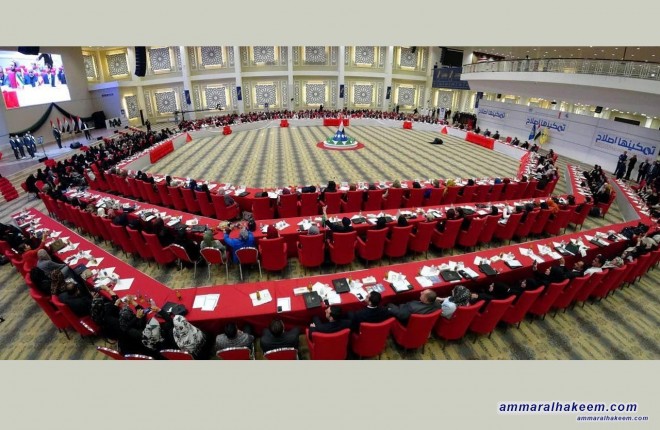 Sayyid Ammar al-Hakim in his speech at the The 10th International Conference on Opposing Violence Against Women, held at his office in Baghdad Saturday 13/10/2018 stipulated joint participation in order support reform project so as to achieve reforms on legislative and executive levels, because the political system is a federal parliamentary system, which requires a supportive political role for the prime minister and his executive apparatus, stressed the need to adhere to deadlines of each step during the executive reform made by the government through clear steps that are announced for the people, called to drain and hit the sources of financial and administrative corruption within the body of the state and ending proxy employment in order to provide service to Iraqi citizens, pointed out that the of Reform and Building Alliance is based on the knowledge of its leaders and political parties of their people and their country, and based on their sound understanding of the complicated nature of circumstances surrounding the homeland.
Regarding the future government, his eminence stated " it is not right that political blocs to say for the Prime Minister you are on your own and we are waiting for results, and it is not right that the prime minister says let me be," noted that the freedom of choice does not prohibit consultation with the political blocs, and that the responsibility of reform, reconstruction, construction and coexistence is a joint responsibility so that nor the government or anyone fail, warned from betting on more patience offered by the Iraqi people as it is a great risk, explained that Iraq needs a government that is balanced, serving, independent on professional and operational levels, proactive not a reactive, that invests and monopolies, and complimentary and not intersecting with the remaining authorities.

"Our crisis today is not in diagnosis of issues, but in being serious to resolving these problems, which requires firmness, courage and ability to achieve rapid progress, which we are optimistic about in the next government," said His eminence. And indicated that the future government is facing a major challenge in this regard and obliged clarify its decisive steps and procedures towards this sensitive case and have zero tolerance towards those involved and expose them to the people without hesitation or courtesy.
His eminence stressed that the Reform and Building Alliance was not formed according to tactical calculations or personal benefits, but "our interaction and contribution is based on

Our faith in the veracity of the path that this alliance has devised for itself as it is today the cornerstone of the independent Iraqi decision. We and our partners will continue to develop this alliance and convince everyone of its right vision and orientation for Iraq future and the independence of its national decision. "

Sayyid Ammar al-Hakim reiterated his call to exclude Iraq from regional and international tension, as Iraq has had enough of problems, crises, wars,suffe and suffering from political and service confusion abd failures, and added "We have serious tasks recover from the effects of long war that we have experienced on terrorism, which is manifested in many forms and images. We can not imagine region stability without stability of Iraq, and those who think will be immune of what is happening in Iraq is mistaken, without doubt the national security of the neighboring countries is closely linked to the stability of Iraq and the success of its democratic experience, the political map and historical evidence support this fact, and emphasized" Therefore, we say clearly that it is not possible to combat global terrorism without the real will and support for the stability of Iraq and protect Iraq from the shadow of proxy wars, which requires that brotherly and friendly countries to put this fact in their political priorities and contribute to the reconstruction and construction of Iraq."

His eminence pointed to what he called a democratic maturity in selecting presidencies within constitutional deadlines and having multiple candidates for a same post, and the political blocs giving freedom of selecting to their representatives in accordance with their conviction in the electing presidencies, plus smooth and peaceful transfer of power, and noted that Iraq became an advancedd democratic example in the region, " and this is what makes us optimistic about the possibility of freeing our people from poor services and fulfilling their demands and aspirations for a free and dignified life. " And expressed gratitude to Supreme Religious Authority "the moral patronage of this path, and for the great Iraqi people, political powers and friends of Iraq in the region and the world who supported this positive transformation. And high appreciation to the three Presidents for their responsible engagement and clear cooperation with the elected presidents. His eminence wished the Prime Minister-designate all success in presenting the ministerial cabinet and government program to the Council of Representatives before the constitutional deadline so to complete the final step in forming the government, considered reform a curriculum rather than a slogan and its translation must be through actions, not just words, and achieving reform is the responsibility of all not beared upon a specific person or side without others.

His eminence pointed out that the call to oppose violence against women is considered one of the noble humanitarian goals and objectives, thanked all civil society organizations, actors and personages interested in this issue, indicated the difficulty of building a good society that have cohesive individuals and institutions without activating the real role of women the backbone of building communities via building individual in a positive and interactive manner towards its sound humanitarian and community issues, pointed out that the world is still suffering from the scourge of extremism and violence resulting from a vision of backwardness and a false and unjust understanding that led to all that we are witnessing today of terrorism, violence and extremism on several levels, including violence against women, and explained "Our authentic Islamic culture requires us to combat all forms of domestic violence, and societal violence and intellectual extremism, and rejecting all practices that deny the legitimate rights and freedoms of man." And pointed out that violence against women is a general humanitarian phenomenon in all societies that is not linked to a religion, nationality or geographical area,even if it differs in methods, means and practices from one society to another. Violence against women could be verbal, suggestive, behavioral, physical or moral. Including degradation of dignity practiced by parents, a husband, father, brother, son or relative, and the most dangerous types of violence is that violence, which becomes a social custom and a community tradition, and expressed regret for the weakness of legal remedies towards a number of phenomena, the violence and abuse of women, pointed to the solutions provided by Islam represented in domestic incentives and disincentives in favor of women respect and protection and measures that regulate the relationship with them, hence putting violators subject to judicial and Sharia accountability.