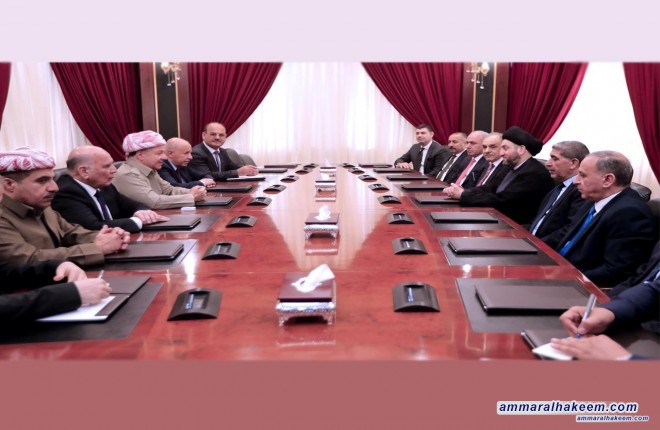 The Reform and Building Alliance delegation headed by Sayyid Ammar al-Hakim, met with Mr. Massoud Barzani and a number of members of the Kurdistan Democratic Party, and discussed the latest developments in the political situation in Iraq and the region and the next constitutional entitlement represented by forming the government.
Sayyid Ammar al-Hakim stressed the importance of consultation between the political blocs and the Prime Minister-designate, indicated the need to support the future government everyone is accountable to susses as well as bearing consequences of failure.
His eminence pointed to the democratic practices witnessed by Iraq, the peaceful transfer of power and the roles rotation, whether by electing the Federal Council of Representatives or the Kurdistan Regional Parliament elections, called for investing these achievements to enhance Iraq's status and enrich Iraq democratic experience.
Regarding the relationship between Baghdad and the Kurdistan Regional Government, his eminence reiterated his call to adapt dialogue for resolving the unsettled problems between Baghdad and Erbil based on win-win approach and that the strength of Baghdad is the strength of Erbil, pointed out that issues vary in legislative and executive measures, and all are accountable to reform as it is a joint consultation task.