Meeting with Jubouri .. Sayyid Ammar stresses to address crises with dialogue and willingness to find solutions 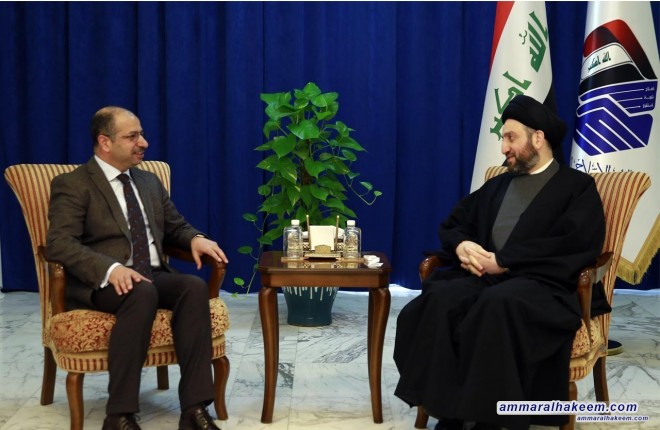 Head of the Reform and Reconstruction Alliance, Sayyid Ammar al-Hakim, in his office in Baghdad, received Dr. Salim al-Jubouri, former speaker of the Council of Representatives and affiliated with Reform and Reconstruction Alliance.
His eminence with Jubouri discussed latest political situation, and stressed on the importance of addressing crises via dialogue and willingness to find solutions, his eminence called on the political blocs to assume their responsibilities towards the political situation, indicated that the Iraqi citizen is not concerned of political tension and waiting for a lot of needs to be fulfilled. His eminence renewed his call to complete the government cabinet and take the prioritizing the government work.
Regarding the Reform and Reconstruction Alliance, his eminence reviewed with Jubouri the achievements made by the Alliance in the institutionalization project, indicated that it represents an important pillar to support the political process and rectify the political system.