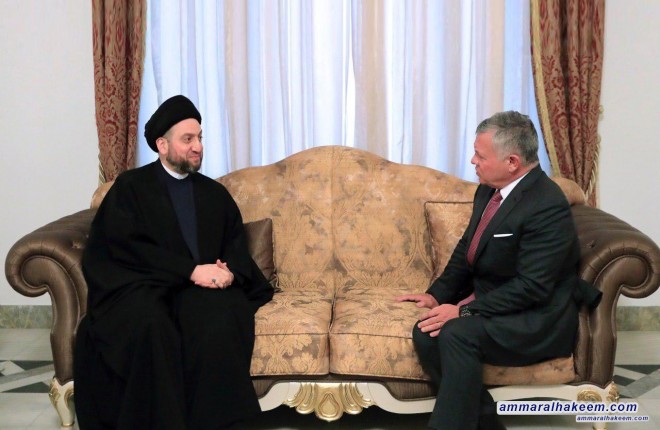 Head of the Reform and Reconstruction Alliance, Sayyid Ammar al-Hakim, met with His Majesty King Abdullah II of Jordan visiting Iraq, at his residence in Baghdad Monday 14/1/2019
His eminence with His Majesty King Abdullah II discussed latest developments in the political situation in the region and bilateral relations.
His eminence indicated the nature of variables in Iraq, the elections, forming a government and assigning an independent personage to run the country, pointed to the second variable forming two major alliances with a national context.
His eminence stressed that Iraq is out of sectarian alignment and aspires to achieve the well-being of its sons and to reconstructing the liberated cities and cities of liberators, and reiterated his conviction of Iraq's pivotal importance and stability, which positively impact the region.
Regarding Palestinian issue, his eminence stressed its importance. And expressed rejection to unilateral sanctions against Iran considered this action a serious precedent in in international relations. And pointed out that the solution in Syria and Yemen is political and the importance of dialogue in resolving unsettled issues.
In respect of the Iraqi-Jordanian relations, his eminence called for investing economic potentials and advance the relations between the two countries based on common interests.