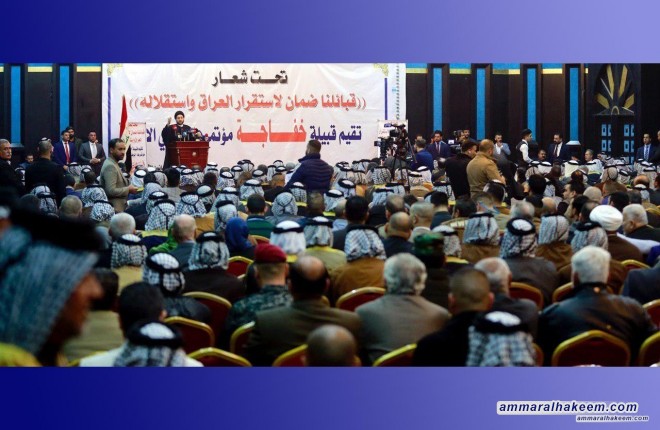 Head of the Reform and Reconstruction Alliance, Sayyid Ammar al-Hakim, in a speech at the first Khafaja tribe convention, Saturday 26/1/2019, called on the leaders of the Al-Bina Alliance to sit at one table to discuss the situation of the country and agree on a unified vision serving the public interest, stressed the importance of completing the ministerial cabinet away from arm-twisting and breaking of wills. And warned of terrorist group activities planning to disrupt security and stability.

His eminence pointed out that the "tribe represents the cornerstone of stability and independence for our society and if the tribe is organized and reconciled in a certain place we will see the return to proper norms that are consistent with the provisions and principles of Islam, and the closer we are to a cohesive society capable of action and giving."
His eminence added that "what distinguishes our tribes is that they are accountable for their sons, and when something is wrong, the tribe shoulder the mistake. It is the one who takes the initiative to control the rhythm. The more it is consistent, the greater the role it plays in controlling the social rhythm and controlling the public paths. Emphasized the importance of laws that regulate the role of the tribes and support tribes to maintain coherent, and that tribal figures and sheikh are respected without the interference of the state that ib the tribes details giving power to some over others, stressed the need to provide moral cover that facilitates the task of tribal elders and sheikh to control their tribes and ensure positive role in society.

In respect of the political aspect, his eminence confirmed that Iraq has witnessed many important and vital steps after the elections, including the formation of major national alliances unbiased to components, the Reform and Reconstruction Alliance and the Al-Bina Alliance, and this is a strategic step in the right direction, if it continues it will eliminate sectarianism and organize the political process, adding that political stability achieves security stability and economic development, this stepb is a strategic variable in the political equation, stressed the importance of keenness to build these two alliances.
His eminence added that among the positive steps, passing the public budget in a relatively short time despite of remarks, it is an ambitious budget seeking to reactivate economy.
His eminence stressed the need to focus on important priorities, namely coordination between the Reform and Reconstruction Alliance and the Al-Bina Alliance, to push the country forward, called on the Al-Bina leaders to meet at one table and come out with a clear and specific vision to define the country's tracks, support the government and serve the people.
His eminence reiterated his calls for making Iraq a bridge between the countries of the world and the region, and to invest international interest in Iraq via attracting investment opportunities, warned of information that indicate attempts to reactivate terrorism, the security leaders are to reconsider security plans and strengthen the security situation to prevent any attack.