Meeting with the President of Iraq. Sayyid Ammar Al-Hakim stresses on completing the government cabinet and prioritize public interest 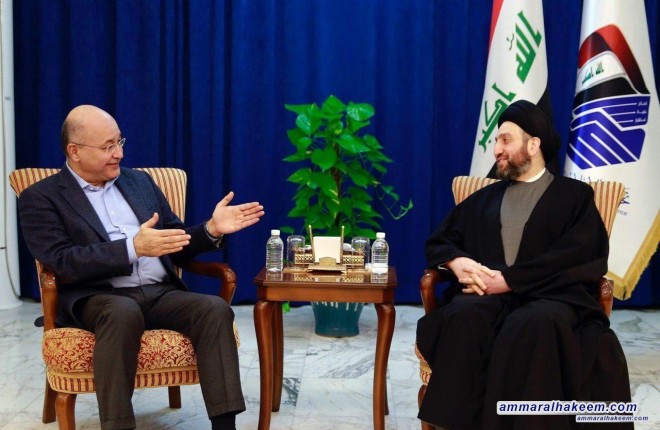 Head of the Reform and Reconstruction Alliance, Sayyid Ammar al-Hakim, in his office in Baghdad, received the President of the Iraq, his excellency Barham Saleh Tuesday 30/1/2019
His eminence with Saleh discussed the latest developments in the political situation in Iraq and the region, stressed the need to expedite completing the government cabinet and to prioritize higher national interest and waiver for Iraq.
His eminence called to present efficient ministers able to achieve the demands of the Iraqi people, praised the role of His Excellency President Saleh in convergence of views and reviewed results of HE regional and international tours, which restored Iraq to its status as a meeting point and a bridge of communication between the countries of the region. His eminence reiterated his call to carry out priorities, especially services, employment opportunities and fighting corruption.