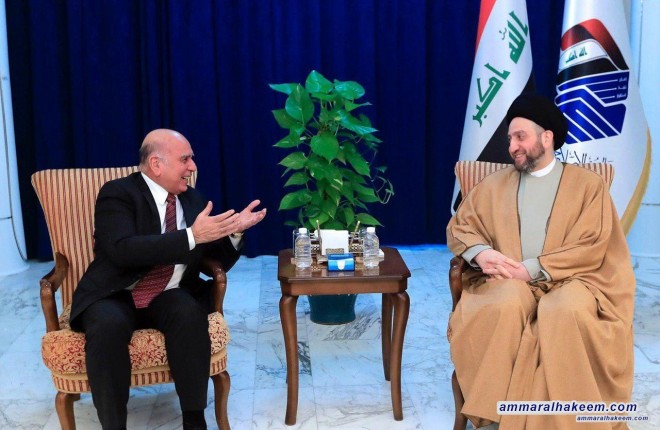 Head of the Reform and Reconstruction Alliance, Sayyid Ammar al-Hakim, in his office in Baghdad received Deputy Prime Minister and Minister of Finance Dr. Fuad Hussein Monday, 25/2/2019
His eminence with Hussein discussed latest developments in the political situation and the economic reality of Iraq, called for communication, dialogue and discussion with the legislative authority and the Finance and Economy Committees in the Council of Representatives .
His eminence also discussed implementation of the government program and the economic part of the program, stressed the importance of economic reform and exiting rentier state situation and mono-income through diversifying sources and adopting a fiscal policy consistent with the government's orientations in this domain.
His eminence stressed commitment to customs tariffs in all border entrances, with the commitment to provinces allocations approved in the budget, and taking into account the rates of underprivileged sectors and needs of each province.
Regarding political aspects, Sayyid Ammar al-Hakim called for expediting completing the government cabinet, providing services, and job opportunities, rebuilding cities and fighting corruption, and shouldered everyone the responsibility of exiting Iraq out of the political stalemate.