Sayyid Ammar al-Hakim to the Council of Arab and International Relations .. The stability of Iraq depends on the state of citizenship 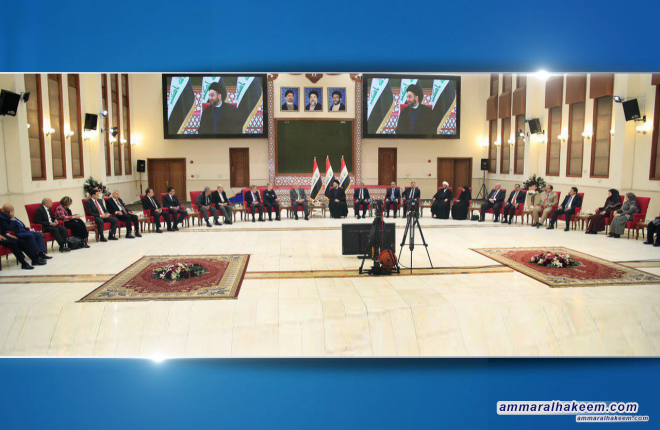 Head of the Reform and Reconstruction Alliance, Sayyid Ammar al-Hakim, and leaders of the Alliance, in his office in Baghdad received Council of Arab and International Relations, headed by Dr. Ayad Allawi, and with Arab political figures Sunday 3/3/2019
His eminence with the delegation discussed latest developments in the political situation in Iraq and the region and the challenges facing the Arab and Islamic region. His eminence stressed that the stability of Iraq depends on the state of citizenship and the unbiased national alliances, pointed out that Iraq has taken great steps in this field and succeeded in defeating terrorist Daesh and ending the occupation of Daesh, and formed two unbiased alliances; the Reform and Reconstruction Alliance and the Al-Bina Alliance.
Regarding the government, discussions covered government forming, assigning an independent personage with economic vision, and was supported by some blocks to assign who he deems appropriate for the ministries, stressed that political stability, security and economic requires favouring the public interest through alliances capable of forming majority, and considered that the two alliances, the Reform and Reconstruction Alliance and the Al-Bina Alliance are the kernel, and pointed to a model presented by Iraq in consolidation of democracy and peaceful exchange of power.
Regarding the regional and international situation, his eminence indicated that the interest of Iraq lies in staying away from the policy of regional and international axes, pointed to the importance of adopting dialogue to solve problems with the importance of evoking challenges and facing them to ensure the interests of all and safeguard rights.