The Leadership Authority of the Reform and Reconstruction Alliance emphasizes completing the government cabinet, independent committees and parliamentary committees 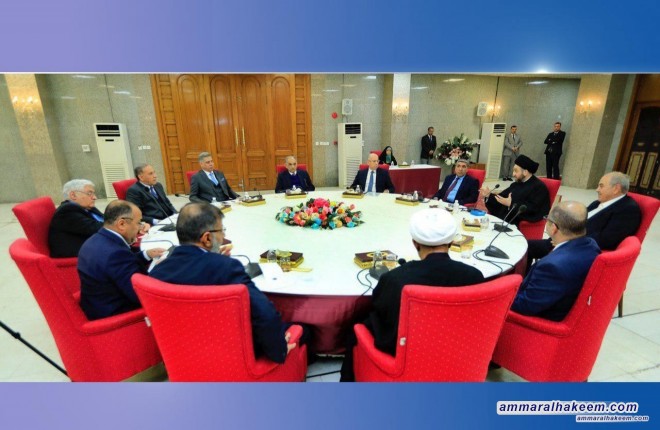 The Leadership Authority of the Reform and Reconstruction Alliance, held its regular meeting under the chairmanship of Sayyid Ammar al-Hakim, head of the alliance, Monday 4/3/2019
Conferees covered in details agenda subjects. Stressed on completing the government cabinet, and conclude independent committees and parliamentary committees with paying attention to balance among these committees, and endorsed the decision of the Political Authority of the Reform and Reconstruction Alliance rejecting the presence of foreign combatant forces and permanent military bases.
The meeting also discussed developments in the politicaland security situation in Iraq, and ways to improve relations between the Reform and Reconstruction Alliance and the Al-Bina Alliance to serve the political process and achieve comprehensive development and the aspirations of the Iraqi people. Conferees listened to the report of Chairman of the Parliamentary Committee to Investigate Security Issues for the city of Mosul, Professor Osama al-Nujaifi; conferees expressed their support to committee recommendations, and discussed developments in the province of Nineveh at security, service, humanitarian and social levels, stressed the need to maintain the stability of the security situation in the province and expedite the reconstruction process of the city and the remaining liberated cities, improve services and the resettlement of displaced families after the rehabilitation of their areas.