Sayyid Ammar al-Hakim: Power is the real challenge for the government in upcoming summer season 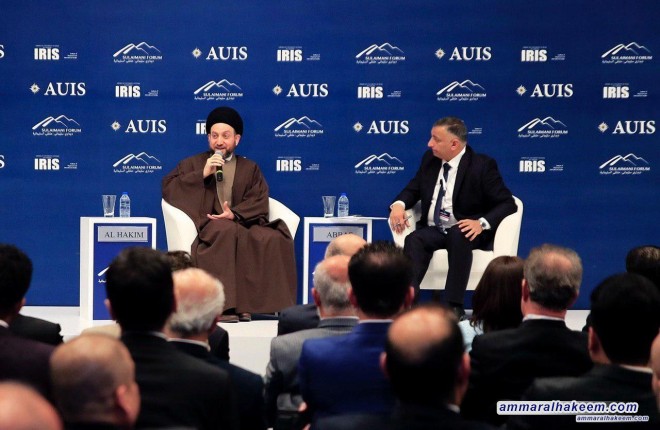 Head of the Reform and Reconstruction Alliance, Sayyid Ammar al-Hakim, in his participation in the Forum of Sulaymaniyah considered that power is the real challenge and test for the government in the coming summer season, and that the service challenge tops political and other challenges Wednesday, 6/3/2019
His eminence pointed out that the 2019 Iraq differs from 2003 Iraq on social and political levels as well as priorities and interest, and that the new youth generation is different from the previous generation and must be approached. The existence of a new political formula represented by the Reform and Reconstruction Alliance offset by the Al-Bina coalition, conclude more than one component and represent Iraq its wider area, and called on the Kurds to join these two alliances.
His eminence pointed out to the regional understanding of the new Iraq changes, especially the most important changes, noted that there are countries of regional conflict, but are keen to find good relations with Iraq.
Sayyid Ammar al-Hakim addressed the pivotal and fundamental role of Iraq in being at the heart of the four nations the Persian, Arab, Turkish and Kurdish, and the to stabilize the region the stability of Iraq must be achieved, reiterated calling for dialogue between Iraq, Turkey, Iran, Egypt, Syria and Saudi Arabia.
His eminence pointed out that all the challenges in the country are a priority of the Reform and Reconstruction Alliance in order to find a solution to all problems. And called for making the unified security system a unified system subject to a central decision under the general command of the armed forces, reiterating its rejection of any monitoring roles of foreign forces on Iraqi soil. And indicated that Iraq could a peace dove in the region between the disagreed and the disputed sides.