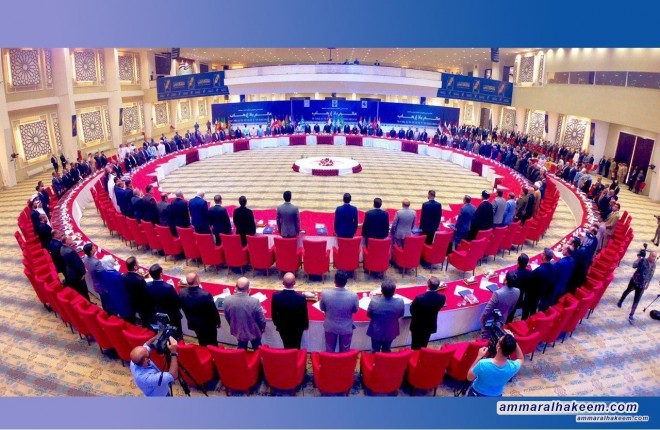 Head of the Reform and Reconstruction Alliance, Sayyid Ammar al-Hakim, at the Arab-African Counter-Terrorism Forum held in his office in Baghdad Saturday, March 23, 2019 stated that considering extremism limited to a religion, doctrine or methodology a grave mistake, pointed out that extremism is a scourge that firstly destroys those set of courses from the inside, and initially damages its followers before anyone else, citing the most recent terrorist attack in New Zealand where innocent Muslims were targeted during Friday prayers in their mosques, indicated that this proves that extremism is a disease plagued by all countries and cultures and has nothing to do with a religion or a belief. Islam and Muslims has been borne false accusations due to the existence of extremists claiming to be part of this magnanimous religion.
His eminence called for making this conference a starting point for a larger work engaging all institutions in a course of action to achieve the intended goal, and indicated that extremism finds its fertile environment in political instability, the failure of development and service provision efforts, the spread of manifestations of ignorance and unemployment, and the absence of active institutions of social upbringing role, especially educational institutions. And added:” We may not exaggerate if we say that the lofty goal that humanity seeks in its different religious and intellectual directions, is building a good person in a good society, which is the basic approach to combating extremist ideology. This goal is not an objective linked to a specific state or society, it is a humanitarian goal, as threat of extremism is a threat to humanity”. And pointed that building an individual human is in the interest of humanity as a whole, and to achieve this goal requires cooperation and coordination on a global level away from the trends and private interests, no country or society is immune to the threat of extremism and terrorism, pointed out that "a genuine dialogue between religions and sects that probe mutual and grasping points. Investment of community and tribal powers and civil society organizations and their impact on the establishment of social harmony. Promotion of coexistence and acceptance of different religious, doctrinal, ethnical or political. Caring for the upbringing of the new generation and youth, women and children. Preserving the rights of society components and minorities. Setting logical measures in dealing with social media. Respecting the sovereignty of countries and its political independence and deepening national identity away from foreign occupation, domination and interference in internal affairs; represent important introductions to address and cordon extremist ideology and its destructive effects to the social structure and security levels.

His eminence pointed out that the world has witnessed for more than two decades a new wave of different challenges and threats to security and ideology, that was supported by a wide range of groups, organizations and tendencies that adopted violence and terrorism to achieve its objectives. The new global environment provided it with additional tools to increase its effectiveness and its ability to threaten the security and peace of societies and countries, and added:” "We are facing threats of a different kind, including those who use technology and cyberspace it created, and those who exploited the conditions of economic openness and freedom of movement, and those who exploited internal disputes and conflicts and instability in many countries etc… to inflict damage to lives, property and infrastructure, and exploit religious, sectarian, ethnical and political disagreement to deepen differences ", indicated that:” This requires to prioritize preventive measures and media interventions to deal with the ideology and the approach leading to terrorism. Terrorism will only reach its goals when there are those who support its intellectual principles and extremist ideologies, secure safe haven for its cells and cover its actions on political, media or social levels”, stressed that exiting the cycle of extremism, violence and instability requires exerted joint efforts by the countries of this region and their various societies, and political, social, religious, media and educational institutions to be integrated into one approach that leads to human development.
His eminence pointed out that Iraq suffered for a long time, especially after the fall of the dictatorial regime in 2003, of unprecedented terrorism and extremism, fueled by various interests and agendas, which were the first sparks in the bombing of the United Nations headquarters in Baghdad, and in the targeting of Shahid al-Mihrab Muhammed Baqir al-Hakim (sanctify his soul), afterwards Iraq entered a dark tunnel and the bombing of the shrine of the Al-Imamayn Al-Askaryain (peace be upon them) in Samarra, one of the most dangerous transgressions, reminded that Baghdad had witnessed unprecedented events, around 25 to 30 car bomb explosions occurred on the same day, dozens, and perhaps hundreds of other attacks across Iraq. The clear and obvious objective of these acts was to practice genocide against the Iraqi people, and drive the wedge of dividing the people of one nation. And explained that the efforts of successive Iraqi governments, the keenness of the Iraqi political powers to deal responsibly with the challenge of terrorism, and the moderate religious discourse of most religious leaders, especially the highest religious authority in Najaf, Sayyid Imam al-Sistani (long live), and upon that the cohesion and patriotism of the Iraqi people, resulted in defeating terrorism and led to the decisive victory of liberating the homeland from the abhorrent occupation of Daesh. The response of our people and their living national forces was as big as the challenge of that great threat.

His eminence stressed that the trial undergone by Iraq represents a great experience in its contents, the knowledge gained by the various Iraqi agencies, as well as the roles played by state, political and social institutions in combating terrorism, noted that this experience can be in the service of other countries to benefit from, indicated that Iraq is aware of the extremist ideology and the remnants of Daesh challenge, in the educational curricula of liberated areas, and hundreds of children affected by Daesh thought, and the security and social and economic situations experienced by those areas under the occupation Daesh; “all represent basic challenges that, as Iraqis, and with the support of our brothers and friends, require actions so as not to turn into a future terrorism in new forms, and considered sustained stability in Iraq a pillar to the stability of the Middle East, this fact is acknowledged by the countries of the world and acting based on it. When Iraq stabilizes, the Middle East will stabilize, and once the Middle East stabilizes, its surroundings in Europe, Asia and Africa will be more stable.