Meeting with Halbousi .. Sayyid Ammar al-Hakim stresses to include the latest Mosul events on the agenda of the House of Representatives 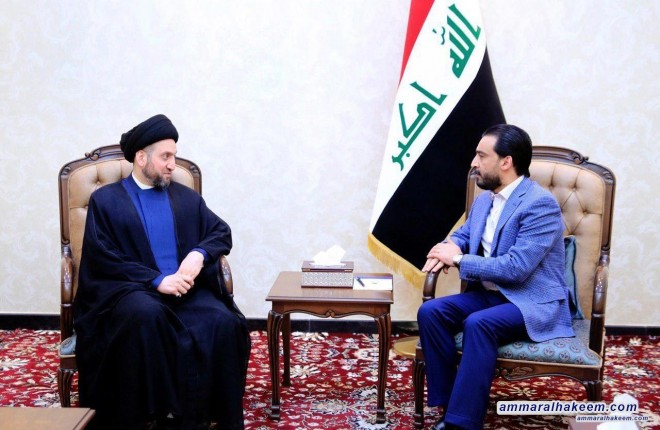 Head of the Reform and Reconstruction Alliance, Sayyid Ammar al-Hakim, met with Speaker of the House of Representatives, Mr. Mohamed al-Halboussi Saturday 23/3/2019
His eminence with Halbousi discussed latest developments in the political situation, especially the recent events in Mosul, stressing the necessity to include the events of Nineveh on the agenda of the House of Representatives at its next meeting.
His eminence called for discussing the parliamentary committee report tasked of holding investigating the situation of the city, emphasized activating the oversight and legislative role of the House of Representatives in line with the necessities and priorities of the current phase, and urged the three high authorities to cooperate and support each other in order to prevent any bad actions intended by those who want to harm Iraq. And reiterated support to the government of Abdul-Mahdi to implement the governmental program for service and development .