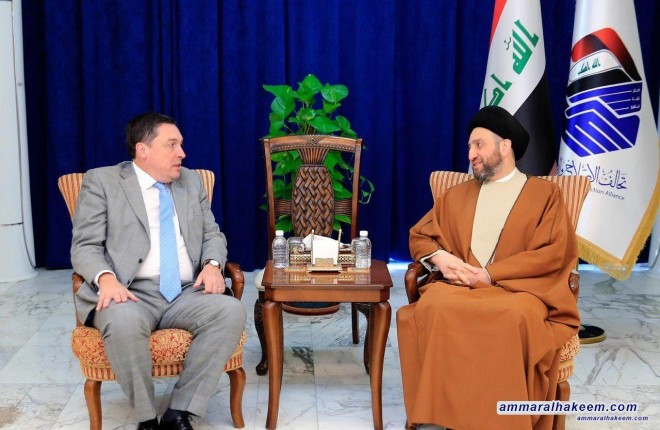 Head of the Reform and Reconstruction Alliance, Sayyid Ammar al-Hakim, in his office in Baghdad, received the Ambassador of the United Kingdom in Iraq, HE Jon Wilks March 27, 2019
His eminence with Wilks discussed the latest political developments in Iraq and the region as well as the bilateral relations between Iraq and Britain, and openness of Iraq to its Arab and regional environment.
His eminence stressed that it is important for Iraq to have positive relations on the basis of common interests with neighboring countries, the region and the world, including the United Kingdom, pointed out that Iraq is open to all and strives to leave the previous phase and meet with everyone on the basis of common interests.
His eminence stressed that the visit of international delegations to Iraq prove recovery of Iraq and positive engagement world countries with the changes witnessed in Iraq, stressed to activate investment and reconstruction of cities, called on the international community to assume its responsibilities in reconstructions of cities and the resettlement of displaced people.
His eminence pointed out that the priorities of the next phase lies in services, job opportunities and combating corruption, pointed out the need to complete the government cabinet to enable the government to implement its service and development program, and necessity of assigning competent and fair individuals who are highly able to run the remaining ministries.