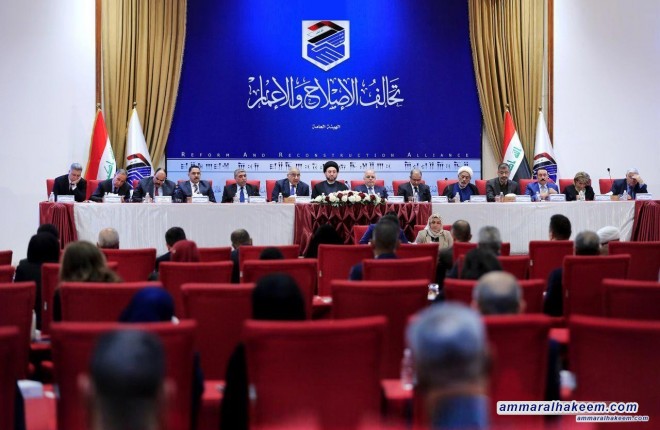 The General Authority of the Reform and Reconstruction Alliance held its regular meeting under the chairmanship of Sayyid Ammar al-Hakim, head of the Alliance at the Office of his eminence in Baghdad Wednesday, 27/3/2019, meeting hosted by the Prime Minister, Mr. Adel AbdulMahdi
Mr. Abdulmahdi covered a comprehensive presentation related to the problems of Iraq as well as solutions required, and the role of each party, whether the government or the House of Representatives or alliances and political powers, and called for the necessity to having a common grounds and a ceiling to differences, and not debatable subjects for being national standards that can not be compromised.

Abdul Mahdi indicated in his speech the importance of communication with the provinces and local governments, pointed out that the provincial council elections need more cooperation and discussion between the government and the House of Representatives, the government is working to provide a budget for projects not for items, expressed appreciation to all the efforts made by previous governments and contributed to the accumulation of pros that resulted in important turning points in Iraq in a number of sectors, despite the conditions and problems that Iraq has hampered, called for adherence to the Constitution as an umbrella to refer to in case of differences.

Regarding water, agriculture and industry situations, Abdulmahdi emphasized that Iraq has enough water reserves, and anticipated abundance of water for agriculture products, called for greater investment of water, stressed that the water in the river and groundwater is sufficient to sustain agriculture if used in the best way, and promised to to pay the dues of farmers swiftly.Regarding the financial situation of Iraq, Abdulmahdi indicated that Iraq suffers from high spending and suffers from a crisis in the management of funds, and promised bank reform and attract investment, especially Iraqi funds abroad, and emphasized on establishing industrial cities in each province, noted that his government will not evade the accountability over the inherited problems of previous stages, and the government continues to provide housing opportunities and distribution of land for all lands provided with services through allocating related funding.