Sayyid Ammar Al-Hakim receives Sheikh Araki, Secretary-General of the The World Forum for Proximity of Islamic Schools of Thought 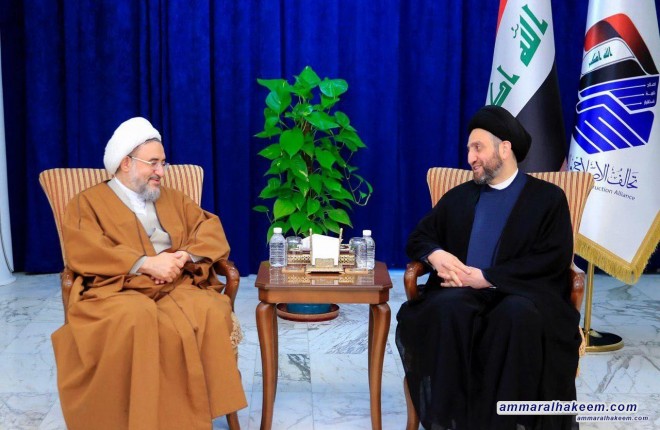 Head of the Reform and Reconstruction Alliance, Sayyid Ammar al-Hakim, in his office in Baghdad received Sheikh Mohsen Araki, Secretary-General of the The World Forum for Proximity of Islamic Schools of Thought (WFPIST) Thursday 28/3/2019
His eminence indicated the nature of changes witnessed in Iraq, including victory over the terrorist Daesh on military level, political victory represented in the unity of Iraq, which has become a title guaranteeing the interests of all, and the community victory through the renunciation of sectarianism and racism.
His eminence pointed to the nature of the unbiased alliances that disregard narrow approaches and adopted a national title as another guarantor for political stability, the most important necessity for security, development and service stability. Sheikh Araki indicated a positive impression of the Iraqi situation citing urban development, security and active markets, indicated that religious events should be a title for national cohesion, especially on the eve of the martyrdom of Imam Kadhum (peace be upon him).