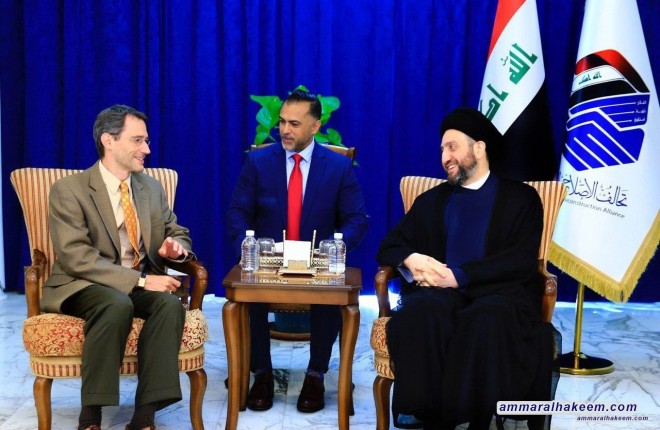 Head of the Reform and Reconstruction Alliance, Sayyid Ammar al-Hakim, in his office in Baghdad, received Charge d'Affaires of the US Embassy in Baghdad, Mr. Joey Hood Wednesday 3/4/2019
His eminence with Hood discussed latest developments in the political situation in Iraq and the region, and the bilateral relations of Iraq and the United States of America.
His eminence stressed that Iraq is taking confident steps towards strengthening its relations with the countries of the region and the world, based on the common interests, emphasized the independence of the national decision, impartiality towards international differences and away from the policy of axes, and stated "Iraq is a place for convergence of views among protagonists"
On the other hand, Sayyid Ammar al-Hakim renewed his rejection of the policy of starving peoples, pointed out that it is futile, and stressed that dialogue is the best approach to resolve differences and spare peoples of the region the scourge of war and the suffering of economic sanctions.