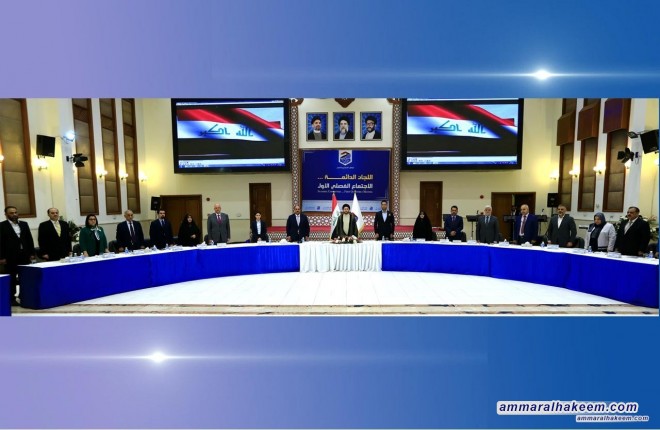 Head of the Reform and Reconstruction Alliance, Sayyid Ammar al-Hakim, during his speech, indicated that the Alliance is establishing a large scale and real national project to represent an important transition to the political process in Iraq, called on members of the committees to conduct field action and keep abreast of all events and crises so that the Alliance will have an on ground imprint at any place requires Alliance's presence.
His eminence also stressed the importance of following up on the decisions made by the committees to ensure the sound implementation, and the importance of holding ad-hoc workshops, because of their importance in supporting the political process in various sectors and topics covered by these workshops.
Head of the Alliance also stressed the need for close interrelationship between the legislative committee and all other committees in the Alliance in order to effectively contribute to enact important laws that serve the country.
His eminence urged to work on achieving a real project of social harmony among all the Iraqi people, because of active role in stabilizing the political process and moving towards building and reconstruction, stressed the importance of media visibility of Alliance leaders and members of parliament, and the need to inform the people on all the roles and achievements accomplished by the Alliance.
His eminence pointed to the need to open up to non-governmental organizations and involve them in the process of reform and construction and development of political action.
The committees also reviewed the work of related committees and the great progress achieved in institutionalizing and expanding committee scope of work. Committees presented a number of proposals that would contribute to work development and influence in the largest possible area serving the country and the citizen.