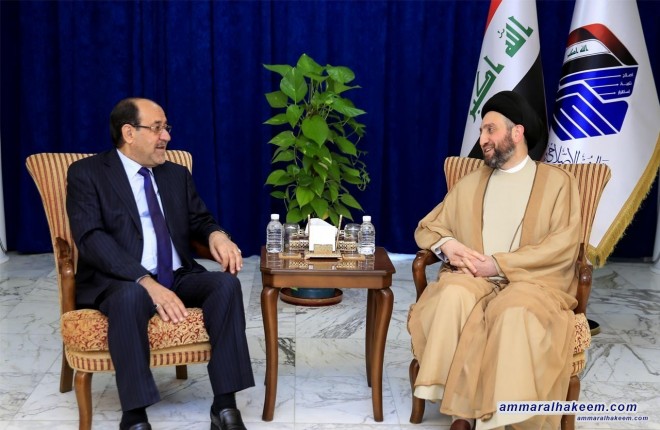 Head of the Reform and Reconstruction Alliance, Sayyid Ammar al-Hakim, in his office in Baghdad, received Head of the State of Law Coalition, Mr. Nuri al-Maliki Sunday 21/4/2019
His eminence stressed the need to complete the ministerial cabinet to be managed by efficient personages, discussed latest developments in the Iraqi political and regional situation, especially completing government cabinet and stressed the need to expedite concluding the remaining candidates of ministries aiming for qualified personages to carry out the government program and provision of services to the people of Iraq.
In this context, his eminence called on all to concede for the sake of Iraq, and making the national interest the compass for action that drives all political powers, stressed the importance of strengthening Iraq's position among the countries of the region and the world, and expressed appreciation to holding Baghdad Summit of Parliaments of Iraq Neighboring Countries and the results that were concluded.