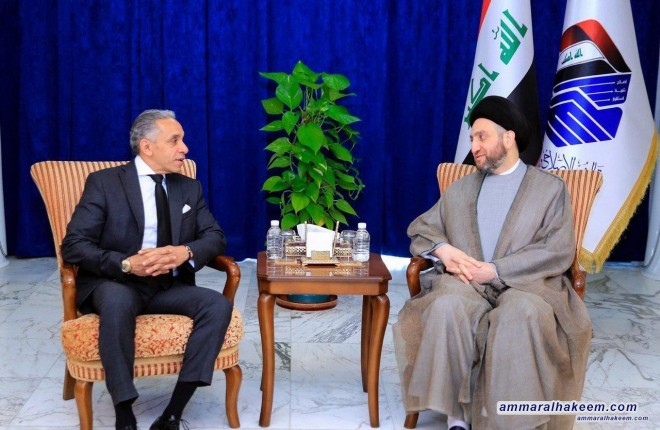 Head of the Reform and Reconstruction Alliance, Sayyid Ammar al-Hakim, in his office in Baghdad, received the Ambassador of the Arab Republic of Egypt, Mr. Alaa Abdel Moneim Moussa Wednesday 24/4/2018

His eminence with Moussa discussed bilateral relations between the two countries and ways to strengthen relations on all levels, and the developments in the political situation in Iraq and the region. His eminence stressed the importance of playing a pivotal role by Iraq and Egypt in resolving issues and ease the tension to achieve stability in the region.
His eminence also praised the outcome of the Iraq-Jordan-Egypt tripartite summit held in Cairo in late March and the importance of investing to enhance cooperation between the two brotherly countries in all fields, stressed that Iraq is witnessing great openness in its relations with Arab and foreign countries and keen to perpetuate these relations.