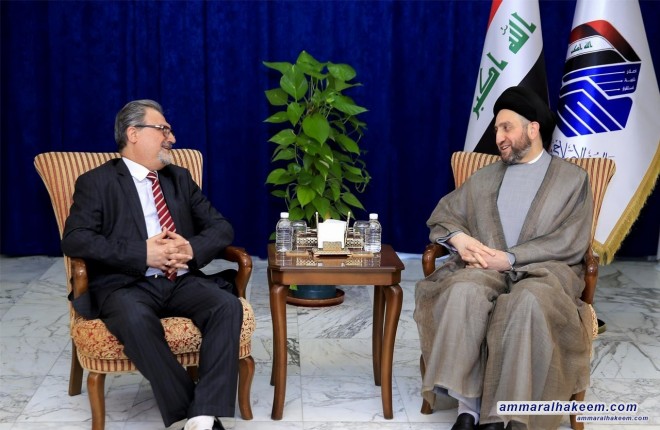 Head of the Reform and Reconstruction Alliance, Sayyid Ammar al-Hakim, met with delegation of the Islamic Union of Iraqi Turkmen Wednesday, 24/4/2019
Sayyid Ammar al-Hakim, emphasized that Turkmen is one of the components of the Iraqi bouquet of roses, which in previously was subjected to exclusion, marginalization and oppression, expressed his pride of this honorable component and praised their sacrifices and standing to answer the Fatwa of the supreme religious authority and fighting against Daesh terrorism.
His eminence also discussed with the delegation the latest developments in the political situation in Iraq, especially in the province of Kirkuk and other areas, stressed the necessity of maintaining peaceful co-existence and stability in the security situation in Kirkuk, and to work resettlement of displaced families to their original areas after rehabilitation of areas on terms of services and provide security.
His eminence also stressed the importance of ensuring the representation of Turkmen in the government and to have a key role in building Iraq, pointed out that Iraq today is at an advanced stage in maturity of relations between all its components, a state of harmony, unity and high cohesion between these components.