Sayyid Ammar al-Hakim: From Baghdad, the winds of change started in the Arab world and will be its destination 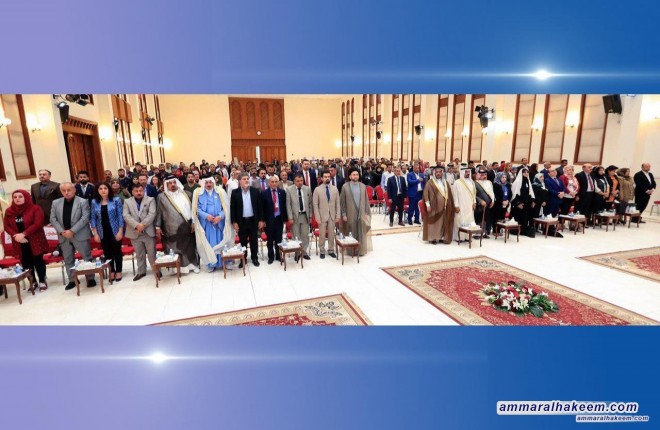 Head of the Reform and Reconstruction Alliance, Sayyid Ammar al-Hakim, in a speech during the first conference of the Iraq Summit for Non-Governmental Organizations, held in his office Baghdad Friday 26/4/2019 stressed the need to strengthen the policy of international and regional openness witnessed by Iraq and the great development in Iraq's international relations as the real power to build positive relations, noted that Baghdad will be the starting point of stability in the region as it was the start of winds of change in the Arab world.

His eminence explained that democracy is not slogans, but a conduct and a culture that must be crystallized in every place, in career and home, when dealing with others, and to accept each other's intellectual, cultural, and national differences. The consolidated democracy is that democracy which promotes the culture of life not death, the culture of optimism, hope, and peaceful coexistence, not exclusion and marginalization, and consolidate the culture of love and intimacy, not a culture of rancour and hatred. And stressed to make openness a general feature, and that consolidating this culture cannot be achieved only by active roles from the non-governmental organizations, and great efforts must be made to build active non-governmental organizations.

His Eminence pointed to the importance of building capacities and capabilites, and rehabilitate a generation of young people capable of facing the negative aspects of society, as well as producing real programs that support the foundations of democracy, pointed out the importance of attracting volunteers who wish to offer their services in various fields within civil non-governmental organizations.

His eminence added " The on-governmental organizations should have a number of objectives, including motivating the society to restore the initiative, end pessimistic prospects, protect the society from itself, confront divisions and crises, contribute to economic development and push to achieve equitable distribution of wealth" and stressed the need to adopt the national project, overcome sectarian and national entrenchment in a methodical manner.
His eminence emphasized on international and regional openness witnessed by Iraq and the great development in its international relations, stressed the need to strengthen the policy of international and regional openness as the real power to build positive relations, and indicated that Baghdad will be the starting point of stability in the region as it was the start of winds of change in the Arab world.