Sayyid al-Hakim receives Nujaifi and stresses on concluding the government cabinet, the reconstruction of Mosul and the resettlement of all displaced families 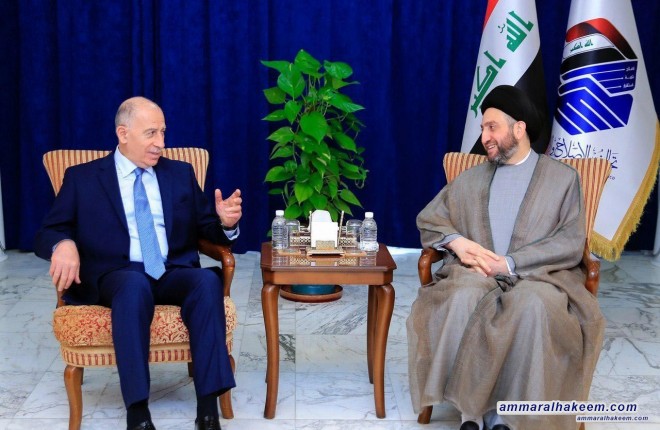 Head of the Reform and Reconstruction Alliance, Sayyid Ammar al-Hakim, in his office in Baghdad received a head of Decision Alliance (one of the Reform and Reconstruction Alliance component), Mr. Osama al-Najaifi Tuesday, 30/4/2019
Both sides discussed on latest developments in the political situation in Iraq and in the region, and the scope of Iraq's impact and vulnerability.
Sayyid al-Hakim stressed the importance of completing the government cabinet and conclude to by selecting individuals with competence, integrity and management capacities in order to carry out implementation of the government program and thus provide basic services to citizens and fight corruption.
His eminence also stressed the independence of the Iraqi decision and that Iraq is more qualified than others to be a place where interests of all meet, and that Iraq's relations are to be based on common interests, and noted that prominently seeking the interests of Iraq and its people.
The meeting also reviewed the future prospects of the Reform and Reconstruction Alliance, and active participation of all the Alliance' s sides in the political arena serving the commonweal. The meeting also covered the developments in the city of Mosul, emphasized the importance of maintaining security stability and expedite reconstruction and the resettlement of all displaced families.