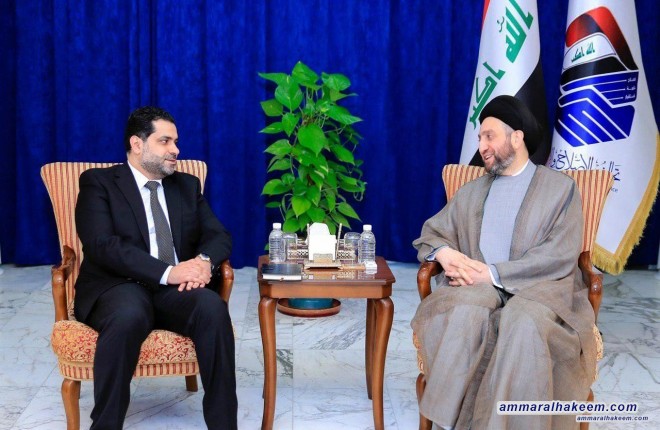 Head of the Reform and Reconstruction Alliance, Sayyid Ammar al-Hakim, in his office in Baghdad received the Minister of Displacement and Migration, Mr. Nofal Bahaa Mousa Tuesday, 30/4-2019

His eminence was briefed about the efforts exerted by the Ministry, especially in the return of the displaced families, and providing assistance and support for vulnerable people especially after the floods.

Sayyid al-Hakim called on the ministry to offer more humanitarian act by providing relief and support to displaced and internally displaced people aiming for their resettlement so to close this file permanently, and stressed on the necessity increasing support to the Ministry of Migration by doubling the allocations necessary to carry out responsibilities.

His eminence also called for convening a conference that sets mechanisms for the return of migrated scientific experts and support them to contribute in the reconstruction and advancement of Iraq's service and development. His eminence also stressed the need to encourage and support businessmen residing abroad to return and benefit from their capital to support investment and development process.