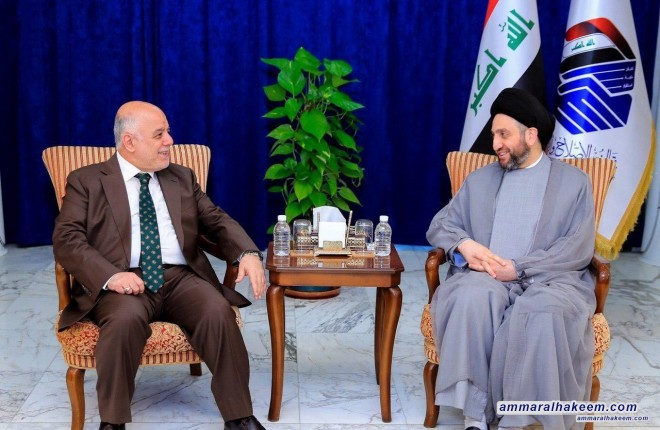 Head of the Reform and Reconstruction Alliance, Sayyid Ammar al-Hakim, in his office in Baghdad received President of the - Nasr (Victory) Coalition, Dr. Haider Al-Abadi Wednesday 1/5/2019

His eminence with Abadi discussed developments in the political situation in Iraq and the region and completing the government cabinet.

His eminence stressed during the meeting the need to expedite completing the government cabinet to move towards implementation of the governmental program, and the need to bring about a comprehensive renaissance in services and development in the country.

On the other subject, his eminence praised the openness witnessed by Iraq regionally and internationally, and building solid relations with the countries of the world, which stems from the supreme national interest.

His eminence also discussed with Abbadi unifying visions of the Reform and Reconstruction Alliance powers in addressing the latest developments in the political situation and future prospects of the Alliance, and the Alliance's active role in creating political stability in Iraq, and thus actively contribute to the construction of Iraq along with other political powers.