Sayyid Ammar al-Hakim with the American Foreign Affairs Iraq's neutrality, independent decision, and rejection to be a platform to attack others 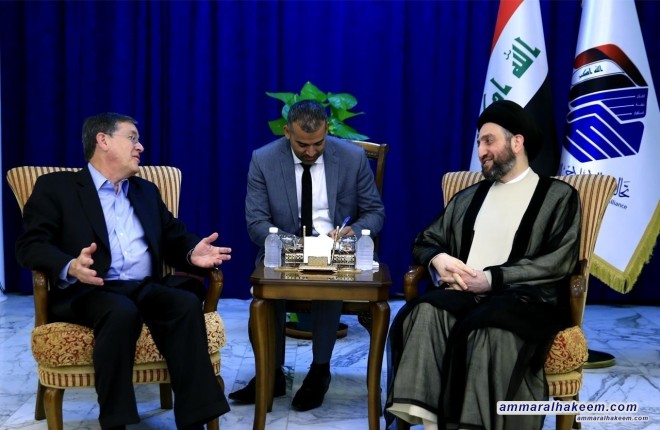 Head of the Reform and Reconstruction Alliance, Sayyid Ammar al-Hakim, in his office in Baghdad, met with US Assistant Secretary of State for Near Eastern Affairs, Mr. David Satterfield.

His eminence discussed latest political developments in Iraq and the region, and bilateral relations between Iraq and the United States.

His eminence emphasized on openness of Iraq to the countries of the region and the world, and Iraq's serious efforts to build balanced relations based on common interests. And also to strengthen stability in the region, affirm neutrality, independent decision, and rejection of becoming a starting point for attacks against others. His eminence indicated that importance of benefiting from all experiences to build Iraq and move towards comprehensive development.

Regarding regional aspects, Sayyid al-Hakim stressed the importance of moving away from escalation and avoid its serious repercussions that negatively affect the peoples of the region, called for a comprehensive dialogue to resolve unsettled issues, and reiterated the importance of exempting Iraq from the effects of this escalation.