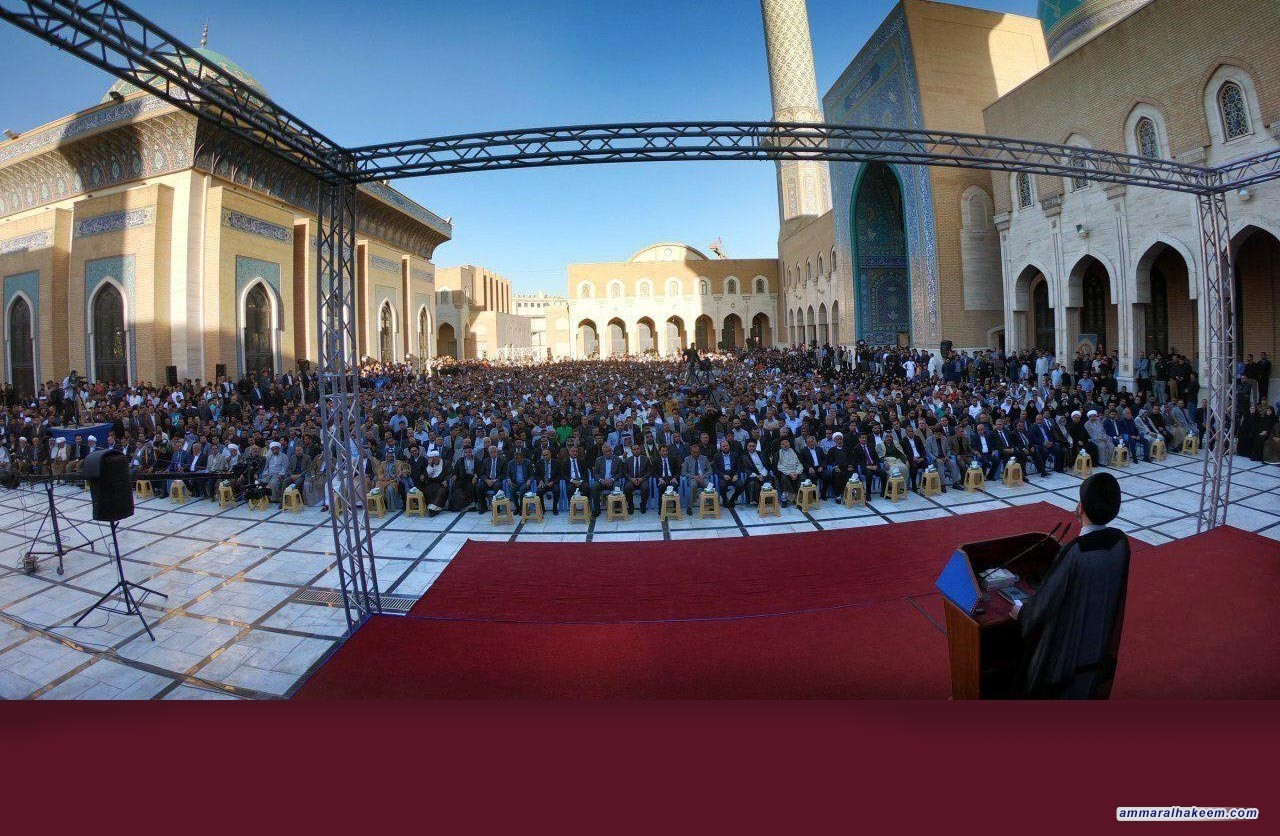 Thousands of Iraqis marked the memorial of Sayyid Abdul Aziz al-Hakim on the fifth of Ramadan of the year 1430 AH, in a huge memorial ceremony organized by the Al-Hikma National Movement at the shrine of Shahid al-Muharab and Aziz of Iraq in Najaf Friday afternoon 10-05-2019
Sayyid Ammar al-Hakim, in his speech indicated that Aziz of Iraq was working silently and discreetly, had a wide network of political and social relations at the national, regional and international levels.

His eminence stressed that Aziz of Iraq had a futuristic view and saw what others did not see. He felt that accountability obliged him to support his people and protect them from dangers that lie ahead before happening. He was clear and firm in political action, and did not believe in the logic of political duplicity, expediency and opportunism, While he was clear and honest in his work and the goals of his national project and was very patient and determined in the darkest circumstances and darkest conditions.

Sayyid al-Hakim also warned that there are negative phenomena in the Iraqi society that need to be addressed, including the existence of the gap between the people and the political class, and political division "although if failure occurs it will impact all". His eminence stressed that despite his support for the government of Mr. Adel Abdul Mahdi, and although that the Al-Hikma National Movement is not within the cabinet, but he will be monitoring and strongly reproach if delaying and stalling occurs in implementing the government program, and also called on all those involved in governmental, religious institutions and social organizations to address the negative phenomena such as high number of suicides, drug abuse and electronic blackmailing.

Sayyid al-Hakim stressed that "the ambition is vast and the potentials of Iraq are big, and the political and government default is clear, but everyone should join hands and not make matters worse" . His eminence stressed that "criticism should be courageous, but for the sake of reform, not to destroy. And to spread a culture of hope, creativity and initiative instead of a culture of petitioning and negative generalization and that makes it worse for Iraq.