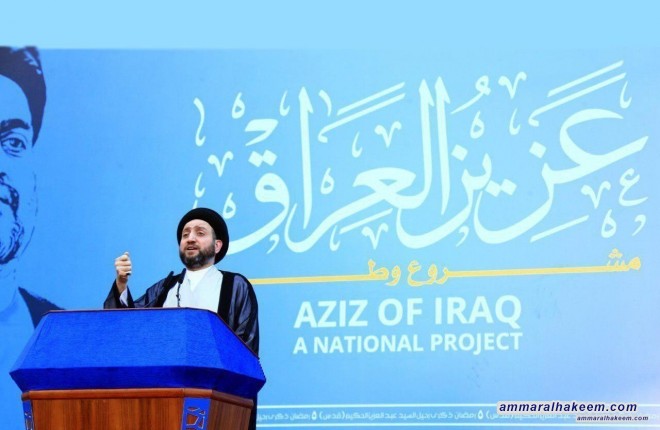 Head of the Reform and Reconstruction Alliance, Sayyid Ammar al-Hakim, warned of the catastrophic and dangerous consequences that will reach Iraq as a result of the US conduct strangling the Iranian government and people, called on the Iraqi government to offer a mediation initiative between the both sides.

His eminence and in a speech during the memorial ceremony for the tenth anniversary of (Aziz of Iraq) Sayyid Abdul Aziz al-Hakim (god rest his soul) in Najaf, pointed out that the American-Iranian conflict, and Iraq being effected is not a result of taking a side, but because Iraq's location in the heart of the region, and stressed the need to spare Iraq any impacts, and distance Iraq from the game of axes, however "Iraq will not stand idly when it comes to its interests and security" .

His eminence stressed that the policy of zeroing Iranian oil exports adopted by the United States of America, means moving from the policy of pressure to policy of strangulation to Iran, its state and its people. This will have catastrophic and dangerous consequences for the region in general and for Iraq in particular. Iraq must be aware of these grave developments and take responsible positions to avoid disaster.

His eminence stressed the importance of moving Iraq from the policy of the center to the policy of the mediator, which seeks to mitigate the conflict, called on the Iraqi government to offer a mediation initiative between the both sides to address the current escalating crisis.
His eminence urged to invest the openness and regional and international rapprochement of Iraq, that was not witnessed over the last few decades, as a golden opportunity that must be invested well.